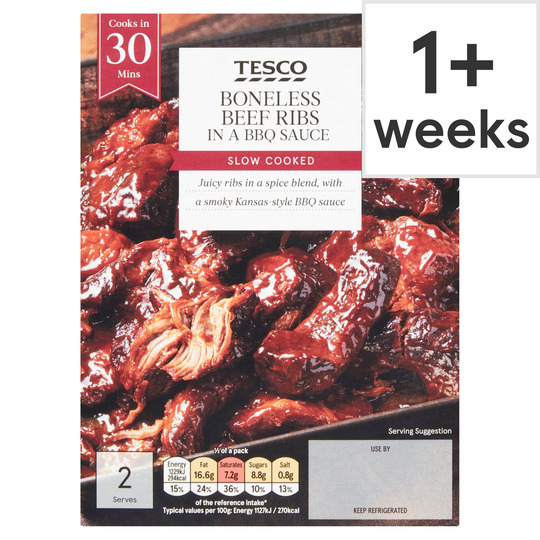 Clubcard Price
1/2 of a pack

Suitable for home freezing. Ideally freeze as soon as possible after purchase but always by 'use by' date shown. Defrost thoroughly for a minimum of 12 hours in the fridge. Not suitable for cooking from frozen. Follow the preparation guidelines above. Once defrosted use on the same day and do not refreeze. Keep refrigerated. Once opened, use immediately.

Instructions: 200°C /Fan 180°C/Gas 6 30 mins Remove all packaging and set sachet of sauce to one side. Remove meat from pouch, breaking apart onto a baking tray. Place in the centre of a pre-heated oven for 25 minutes. Remove from oven, baste with juices than drain away excess juices. Open sauce sachet and pour over the meat and mix well. Return to oven for a further 5 minutes. Serve and enjoy.

Made using British and EU beef.

Poor quality meat - actually, lets use the word gristle as there was so little meat present in either of the two packs I bought. Portion size was laughable - if the sheer chewing required was not enough to put you off, then there is no way two people would be satisfied with the portions the sauce is quite good - the only redeeming feature. In short - AVOID buying these - save your money and buy something else

Gristle just not do!

Used to be better quality meat, the recent packs have had a lot of fat & gristle. Also the packaging is misleadingly much larger than the contents.

Not enough for two and lumps of pure fat.

I like the boneless ribs but the portion is so small for the price - certainly not enough for 2 people, in fact hardly enough for one - why is it in such a large box when the size is so small?

Not enough for two adults.

The meat is very tasty and I enjoyed it - hence 3 stars. The trouble is, it is supposed to feed two people and there were only 5 small pieces of meat - definately not enough for two adults!

Box only contained a few small pieces of meat and would have just about been enough for 1 person never mind two. Sauce had orange clumps of what looked like fat in which was very unappealing! Disappointing.

Unlike some reviews, we found no gristle in the cuts and there was plenty of BBQ sauce. There was very little sinew on one or two pieces, though. Overall it was quite good tasting and the meat was pulling apart nicely. However, we do agree with other reviews about the portions. The box is deceptively large in size, as the pack with meat was about the size of a female adult hand. Having read the reviews before purchasing, we bought two boxes for 1 adult and 2 children. But even then it seemed barely enough.

Unfortunately my product didn’t come with the bbq sauce :(

The Texas bbq sauce does not overpower the star of the show, tender, succulent, slow cooked beef rib. If you prefer taste to searing heat then this is for you. I absolutely loved them. Oven cook only but that gives you time to decide what to cook with them, Jacket spud, chips, Roasters, Salad (ugh) Rice, You decide.

So tender and tasty. I had a pack to myself with some Chips. The additional sauce sachet that is added near the end really makes the ribs stand out.