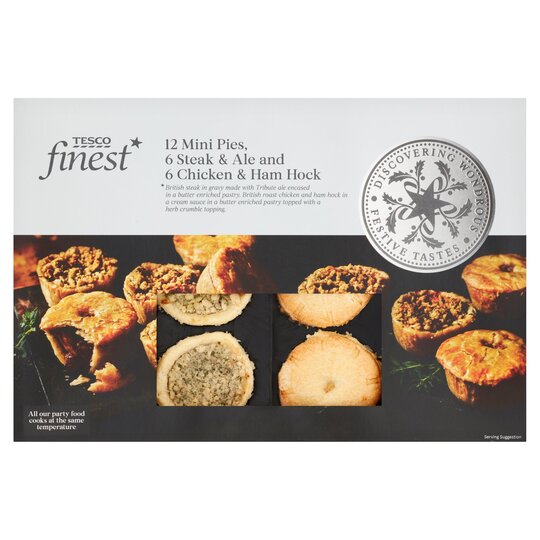 Instructions: Release individual pies from the tray by pushing up from the base. Can be eaten hot or cold. For best results reheat from chilled. 190°C/ Fan 170°C/ Gas 5 15mins Place pies on a baking tray in the centre of a pre-heated oven.

Instructions: Release individual pies from the tray by pushing up from the base. Can be eaten hot or cold. For best results reheat from chilled. 190°C/ Fan 170°C/ Gas 5 19mins Place pies on a baking tray in the centre of a pre-heated oven.

Bought these today for a buffet lunch. Everyone loved them.

Far too good for guests!

We’ve had them for each of the last two Xmases and were really impressed. The pastry is really good, and I yield to no comers my crown as the pastry queen of ... well rounded here, anyway. The fillings were equally good, and generous, too, considering each of these little pies amounts to no more than a couple of mouthfuls. In fact, having tried the first pack we decided they were far too good for guests (we tend to decide this a lot when we particularly like something) so used them for those occasions when we were too tired (all that Xmas shopping, and wrapping, and cooking) or just couldn’t be bothered to cook. Three of these little pies each, with maybe a mouthful or two of Tesco ‘Finest’ coleslaw and a dab or so of some kind of mustard or chutney, made a very good snack meal to be eaten by the fire gorging on old B&W films on the telly. They also freeze perfectly, and though I suspect you’re not supposed to bake them from frozen, we didn’t see that as a problem we couldn’t overcome by the generous application of a little common sense about making sure the filling is burn-your-finger hot. You may decide to be less cavalier — we’re old, we’ve lived long enough anyway — and defrost them first. Either way they cook quickly. In a half-decent fan oven, either full size or the little kind of mini oven we now use most of the time, they are piping hot in around the time it takes to make a cuppa and argue about whether you have already seen that film within the last three weeks. (The answer, infuriatingly, is always ‘‘yes’ but we persist in the hope that there is still somewhere an English-language film made in the last century or so that we haven’t seen at least once. This defines modern retirement, by the way: you younger folk take heed and, to quote the book on which the film Mrs Miniver, starring Greer Garson, was based: if (we) cannot be to you a shining example, let (us) at least be an awful warning.) But at least the pies are never a disappointment.

These were delicious! Ordering again this week.