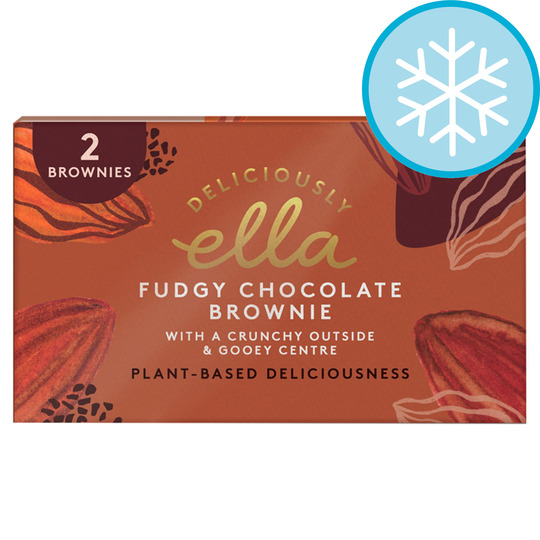 Cooking Instructions
Instructions: For best results oven cook from frozen.
Leave to stand for at least 2 minutes before serving.
All appliances vary, these cooking instructions are a guide only.

Oven cook
Instructions: Remove the brownies from the cardboard box. Gently tear away the paper cases and base from each brownie and place directly on a baking tray in the centre of a pre-heated oven at 200°C (190°C fan, gas mark 6) and cook for 11 minutes.

Made with love in the UK

I received these as a substitute for the Deliciously Ella chocolate cookies I had ordered. I cooked them for the minimum time suggested and served them with Creme Fraiche. They are rather small portions, but I thought they tasted really nice. Can’t quite understand the really negative reviews.

I buy these regularly due to them being gluten free. As other reviews have stated the aren't a standard brownie texture. They're somewhere between that and a cake. You get a slight crunch from the chia seeds and they have a lovely gooey chocolatey flavour. I personally love them. You definitely need a little ball of vanilla ice cream on top to finish it off.

good taste but did have issues

taste was nice but surprisingly high in sugar for such a small portion it also took longer to cook than the box said, considering the price, I won't be rushing to buy again anytime soon

This is horrific, looks and taste like tar. I don't know how it's on the shelves

Got these as I am a vegetarian, trying to make more vegan choices. They are nice with a bit of ice cream, but they don’t taste anything like a brownie. More like chocolate porridge. Quite sloppy, don’t think I’d like it on its own, but was really good with vegan ice cream. Was shocked it was 30g of sugar per serving! Could think of much nicer things to have if I wanted 30g of sugar

This is one of the nicest chocolate brownies I hav

This is one of the nicest chocolate brownies I have tasted 😋

I heard so much about these dodgy chocolate brownies, I really wanted to try them. All I can say is I was very disappointed, tasted like chemials and not at all nice. What a shame. Won't be buying these again.

So yummy couldn’t tell it was vegan, really moist cake and soft, lovely with ice cream or cream

I like the texture of a fudgie brownie so this was perfect. It’s more cakey around the edge so you get the best of both. Had it with some vanilla ice cream and it went down a treat, I’ll definitely buy again. I don’t know why some of the other reviews are so negative because they’re tasty!