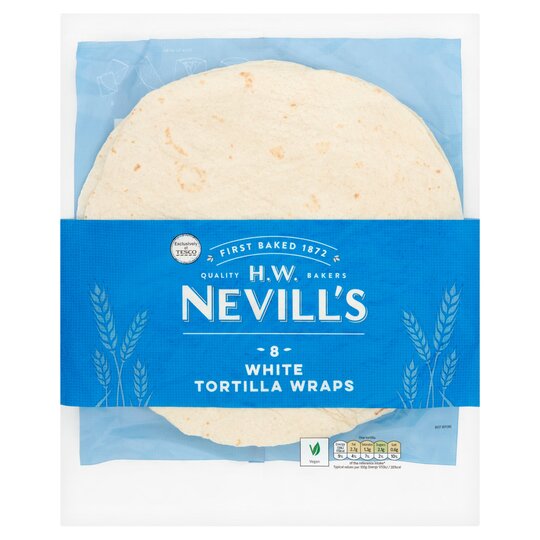 Suitable for home freezing. Ideally freeze as soon as possible after purchase but always by date shown. Once defrosted use on the same day and do not refreeze. Defrost thoroughly for a minimum of 2 hours in a cool, dry place. Store in a cool dry place. Once opened, keep refrigerated and use within 2 days and by date shown.

YUCK! Too firm and has a taste to them.

The wraps themselves are lovely once you can prize them apart & if you don't mind them being ripped and full of holes! Have had them many times in the past with no issues but the last 3 packs I've bought in as many weeks, have had this problem. Worth paying a more for ones you can actually separate intact!

Bought 2 packs of 8 wraps but found them to be 2 packs of a clump of wraps. All stuck together and unable to part without tearing them making them useless for wraps. Worst wraps I have ever used.

Decent - especially for the price

I’ve never had a problem with these wraps sticking together as some people have reported. Maybe I’ve been lucky, but, as far as I’m concerned, these are decent, especially for the price.

They stick together making them useless!

No good if you can't separate them!

Had two packs, first was ok but the second pack (still well within date) were all stuck together in the middle, so useless!!!

Out of the whole pack we managed to save just TWO! The rest were all stuck together and ripped when we tried to separate them. Won't be buying these again!

Too often stuck together in the middle of the pack

Good size and good value wraps but they are often stuck together in the middle of the pack. Some are difficult to separate without creating tears or holes resulting in them being impossible to use as a wrap.

First pack of these that I bought were stuck together and when I peeled them gently apart they ended up full of holes. Thought it must be just that batch so tried again a few weeks later and the same thing happened. Wouldn’t buy again