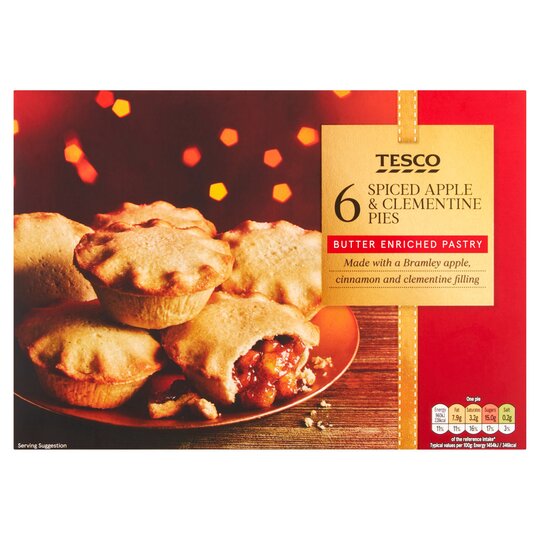 11%of the reference intake
Saturates
3.2g

Instructions: HEATING INSTRUCTIONS OVEN 180°C / Fan 160°C / Gas 4 8 mins Can be eaten warm or cold. Remove outer packaging. Place pies (still in foil cases) on a baking tray in the centre of a pre-heated oven for 8 minutes. Leave to stand for 3 minutes after heating.

Instructions: 800W / 900W 10 secs / 10 secs
Remove all packaging, including foil case.
Place a pie on a microwaveable plate and heat on full power. If heating 4 or more pies at a time, heat for 30 seconds.
Leave to stand for 2 minutes after heating.

Fantastic tasty pies. Looking forward to having them next Christmas.

I loved these pies. Great alternative to the traditional mince pie. Gutted my local Tesco’s have ran out. Was hoping to buy a couple of boxes. Really hope they’ll be back again next year.

Not unpleasant, just nothing like I was expecting them to be. There was no clementine flavour whatsoever and only the barest hint of cinnamon. If you like apple pies then there's no reason that you won't like these, but you may as well buy Tesco's standard version which are cheaper.

These are awful. tasteless stodge pretending to b

These are awful. tasteless stodge pretending to be a pie. Will not buy again. They fall apart getting them out of the foil,. Not good, a failed experiment by the Tesco team.

These had the potential to be so nice but the filling is so wrong. The image on the packaging suggests that it will have apple chunks and a hint of cinnamon. It was more like overly sweet apple puree with a handful of cinnamon. I could barely taste the clementine too. This could've been a lovely alternative to mince pies, which I dislike, but they need to be massively reworked. The only saving grace is the pastry, which is good. Please bring them back next year with bigger apple chunks, less cinnamon, less sugar, less apple puree and more clementine flavour!

Was sent these as a substitute for mince pies, they sounded really nice & I do like things with cinnamon, apples & spices, but these were a big disappointment, the pastry was lovely ,but the mushy filling in the pie was horrible, it wasn't anything like the picture on the box & certainly wasn't as described , the filling was like a gluppy thick sickly sweet,cinnamon flavoured jam , the only apple in them was a couple of minute pea size pieces, I ended up throwing them in bin because even the birds didn't like them. Come on Tesco I know you can do far better than this

Yuk!! Worst mince pies I have ever eaten! The filling was what I would describe as ‘claggy’ and so so so sweet. I ate one, other half ate one and the rest ( so wasteful ) are heading for the bin!

Lovely pastry and well filled but the overwhelming taste of cinnamon overpowered the taste of clementine, if indeed it was there! Might be ok with a dollop of cream but sorry, I found them disappointing

Good pastry, 'slight' cinnamon flavour - 2 stars. The rest of it is so sweet it rattles your fillings & you can't taste anything! Shame cos the idea sounds good but needs a lot of work to put some flavour contrast in them (& chunks of apple too)

These were horrible, like eating through several centimetres of over-sweet tasteless jammy stodge.