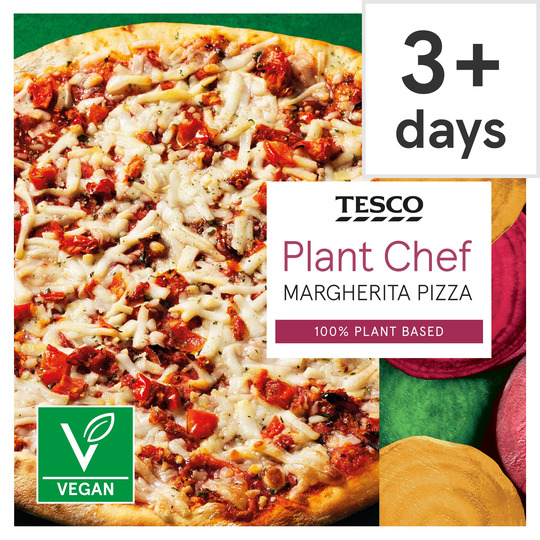 Instructions: 200°C / Fan 180°C / Gas 6 11 mins Place pizza directly onto the oven shelf in the top of a pre-heated oven with a baking tray on the shelf below.

Instructions: 200°C / Fan 180°C / Gas 6 14 mins Place pizza directly onto the oven shelf in the top of a pre-heated oven with a baking tray on the shelf below.

This pizza is much nicer than the frozen vegan ones I have tasted . It is cheaper as well !! I will be buying this again.

Cannot comment on the flavour really as it was bou

Cannot comment on the flavour really as it was bought to use solely as a base for adding my own toppings. However the base was very very hard and tough, so hard it was impossible to cut through despite being cooked as per the instructions. It was just about edible but there are, I have now discovered much better ones in other supermarkets.

Honestly this is the worst pizza I've ever had. It tastes of nothing....no flavor...you can actually see the base from any angle because there is very little topping. The cheese has no flavor....Also the topping seems to separate from the base oddly and doesn't hold together...not good. Very thin also...disappointing as the tesco product picture looks good...yet very deceptive!

Really good nicely flavoured vegan pizza , can add your own extra toppings and has a really nice base -5 stars 👍

I found this pizza to be too dry with little flavour. There are better tasting vegan pizzas to be found on Tesco's shelves for the same price.

Really delicious. Lovely tomato sauce - tasted just right. Vegan cheese good and melted nicely. Would give 5 stars for taste but the stingy toppings let it down. (We added more vegan cheese. ) Will definitely have again though.

We've had a few of these over the last few weeks. They're very good for the price, and the vegan cheese tastes good. The basic Margherita base is always good for extra toppings - I like to add capers, chillis, and vegan pesto on mine. Very nice!

I have purchased this pizza several times now and

I have purchased this pizza several times now and have never been disappointed, very tasty

Not worth the price increase for vegan label.

This was given as a substitution. Not happy as firstly it was smaller and secondly looked like a cheap 69p pizza but with coconut cheese on it. Not worth the extra money for calling it vegan. Handed back for refund

Good alternative to the standard ones

If like me you're not vegan but experimenting with healthier options (but not too much - this is still pizza we're talking about), definitely give this a try. Like a lot of replacement products it doesn't taste exactly the same as what it's trying to emulate - the consistency of the cheese is slightly odd for one - but it is a pleasant surprise. I actually topped it off with pepperoni and enjoyed it pretty much the same as I do a standard tesco pizza. So with much less salt and saturates, it's a win.