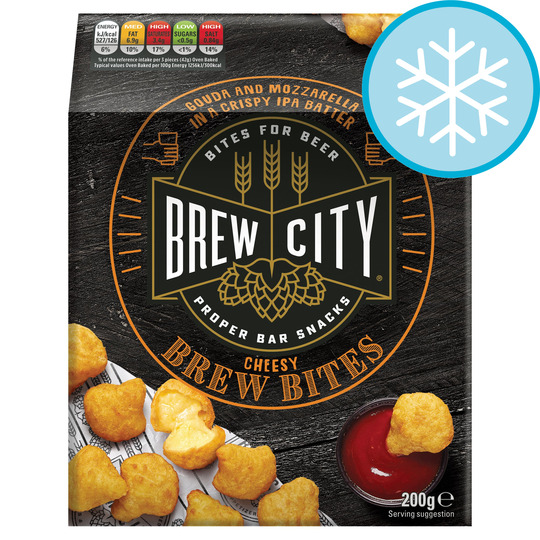 of the reference intake*
Typical values per 100g: Energy Per 100g Frozen

Keep frozen at -18°C or belowIf thawed do not refreeze

Oven cook
Instructions: Here's how to cook one full pack of Brew City Cheesy Brew Bites. If cooking a different amount, adjust the cooking time accordingly. To get the best results cook from frozen; these instructions are guidelines only.
For the most delicious results, do not overcook!
1 Preheat the oven and baking tray to 210°C/200°C Fan/Gas Mark 7.
2 Spread a single layer of bites onto the baking tray and pop it into the top of the oven.
3 Bake for 8-10 minutes, turning them every now and again, until they're lovely, crisp and light golden.
Caution: Product will be hot after cooking.

Fantastic product. You need to be careful when cooking them - and in particular, to be careful not to overcook them. The packaging states that they need 8-10 minutes, turning occasionally. I've found that if you turn once at about 5 minutes, then at around the 9 minute mark, they are on the verge of bursting - at 10 minutes you've lost the battle and all the cheesy goodness has spilled out onto the baking tray. Get it right though, and these are brilliant - especially when coupled with a nice BBQ sauce for dipping. I love them and always have several packs on the go as a nice snack for one, or a starter for two of us.

Still thinking about these

I've purposefully made a tesco account just to counter all these negative reviews as they almost put me off from buying them, I'm so glad I did end up buying these, so great. My partner cooked them for me, turning them every 2 minutes, none exploded, had perfectly crispy batter and whilst they're discounted, they're definitely worth it. I reccomend turning them every 2 minutes when oven cooking, if you can put in the time - you'll be beyond pleased with the results

These are really delicious. However, DO NOT PUT IN THE OVEN!! Like the packaging says. Deep fry for half the time and then they wont explode like people say they do in the oven.

A further waste of money. Of the three items I bought these were better, but still substandard. Most of them popped open even though they were barely cooked and made quite a mess of my baking tray. I think the manufacturer should go back to the drawing board and rethink these products. I won’t be buying ANY of them ever again!

Great but a few burst cooking

Really enjoyed these but as everyone said some of them burst after cooking.

These things had a great advert but in reality, as someone has already pointed out, all they do is burst in the baking tray (every single one of them) and become nothing but a sheet of cheap cheese with empty batter floating in it. Do not buy these. The advertising looked great, the actual product is inedible

Utter crap, expensive and they just leak all the cheese out. Wouldn’t bother again

Massively over-priced poor quality product with a massive advertising campaign and decent packaging. Takes like 15-20 minutes to cook (packet says 10) and even once they are ready they dont taste nice, imagine if you got cheesestrings and put thin breadcrumbs around them and heated them up... yeah, that. If they would of spent as much money on developing the actual product instead of spending it on the advert thats on every 5 minutes it would of probably been wiser.