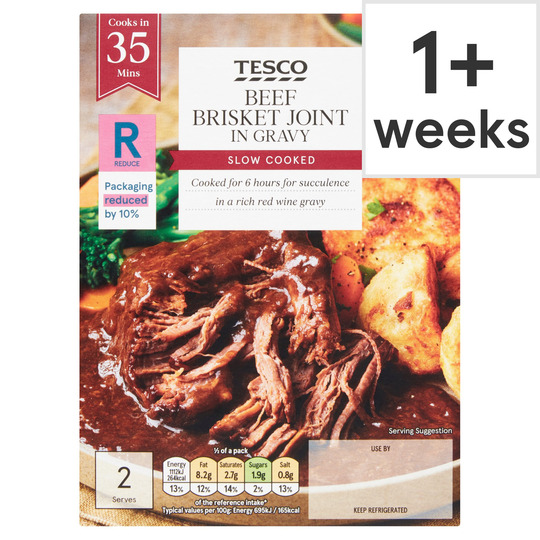 Suitable for home freezing. Ideally freeze as soon as possible after purchase but always by 'use by' date shown. Not suitable for cooking from frozen. Follow the preparation guidelines above. Once defrosted use on the same day and do not refreeze. Defrost thoroughly for a minimum of 12 hours in the fridge. Keep refrigerated. Once opened, use immediately.

Instructions: 200°C/Fan 180°C/Gas 6 35 mins Remove all packaging. Remove meat from pouch, place onto an ovenable dish and cover with foil. Place in the centre of a pre-heated oven for 20 minutes. Remove from oven, discard foil, stir the gravy and return to the oven uncovered for a further 15 minutes to thicken the gravy. Remove from oven, rest for 2 minutes before serving.

Instructions: 800W / 900W 7 mins 30 secs / 7 mins
Remove pouch from carton. Place the pouch onto a microwavable dish and pierce top of the pouch several times.
Heat on full power for 4 minutes (800W & 900W), shake pouch gently and leave to stand for 2 minutes. Heat on full power for a further 3 minutes 30 seconds (800W) / 3 minutes (900W). Stand for 2 minutes before carefully removing the beef and gravy from the pouch onto a serving dish. Stir gravy before serving.

Made using beef from the UK and Ireland

Weight of contents states 380gm, beef ingredient given as 75%, this corresponds to 285gm. Only one piece of meat in the package weighing 180gm.What has happened to the other 105gm? Package states serves 2, 180gm is just about enough for one. On the positive side the beef was properly cooked and flavoursome, as was the gravy. Considered poor value for money

The only nice part was the gravy. The meat was complete inedible rubber. I actually bought two as I think there was a special offer at the time. The other ended up in the bin. Never again!

We've had this several times and has always been very tender and very tasty. Only just enough for two though.

Had this for the first time last week, very tasty but I wouldn't say it would be enough for two. The meat was tender and pulled apart as shown, and I had some little crispy potatoes (courtesy of Tesco's and very nice they are too) and peas. There was just enough gravy so very happy indeed.

Hit and miss. Had one really nice one but won’t buy again as the others have been tough,gristly,fatty and quite unpleasant. Turns out to be expensive gravy.

Read the reviews and was a bit dubious but for the price gave it a go. Pleasantly surprised it was actually quite nice and made a lovely midweek dinner. Very lean and tender.

Absolutely awful, through it away. The grave was bitter,oily and tasted of fat. The meat had lots of wobbly fat and was tough and stringy. I had followed the directions of oven cooking to the letter. A very expensive mistake. Avoid it looks and tastes nothing like the picture.

To my surprise and i was worried by other reviews this was really nice hardly any fat or gristle, it doesn't really slice just falls apart which I didn't mind. Gravy had a red wine taste to it which was lovely, definitely will buy again