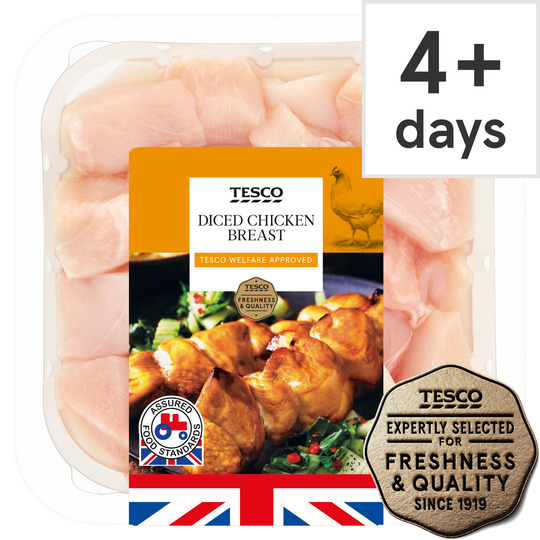 Shallow Fry
Instructions: Pan Fry Heat a little oil in a frying pan or wok until hot. Place one of the pieces into the pan and if it sizzles, the pan is ready. If not, heat for a little longer. Fry for 18-20 minutes over moderate heat, turning frequently. Chilled: 18-20mins

Produced in the U.K., Origin

It was the best last minute option in the shop, date was fine but the taste of the chicken was frankly revolting and judging by the other reviews it wasn’t a one off. While my packet didn’t have the nasty bits or bad smell the taste was like out of date turkey?! It sickens me to think about it and I no longer trust to buy meat from this shop.

Absolutely awful. Most of the pieces still had sinew attached along with blood spots and hard fat. I had to throw a third of the pack away before I could even start. Also, the size disparity of the pieces was huge. It’s like the breast pieces that don’t make the cut into the multipacks get eviscerated in a blender and thrown into one of these ‘diced’ packs. The end result was flavourless and some of the chunks had that ‘crunchy’ gross texture. Never again. Avoid like the plague.

Very poor quality. Only about one-third of each of the two packs I bought were usable after cutting away all the blood, veins, sinew and gristle. This should not be on sale.

Utterly substandard. By the time I had finished trimming the meat less than half was suitable for consumption Full of tendon and bloody bits. Tesco's standards have dropped a lot over recent months.Their buyer should have rejected this

Chicken to die for?

Disgusting. Chicken had 2 days life on it. It smelt smelt off, but decided to cook it anyway, after 15mins of frying I decided to try a bit.. As others have said it's hard and chewy, tastes rotten. If only I could do zero stars. Tescos should be ashamed to put their logo on the pack. It's enough to drive distrust and look for alternative sources of shopping. Horrid festering meat!

Rancid smelling, had to bin

Both sets we bought were rancid smelling and went straight in the bin, despite being in date still.

The last three times I have bought these Diced Breasts has been Disgusting! I used to use these for curries, but when you open the bag it's all clumped together! what you eventually have is about 150g of usable chicken and the rest are scrap ends, fat, gristle not fit for even my cat! I think Tesco should up their quality control as their meat products are getting worse and worse. I use home delivery as I am wheelchair bound. If I could shop around I would go elsewhere. Pretty damning as I've been strictly Tesco for over 10 years. Please get it right

This chicken was absolutely dreadful! If you’re looking for approximately one poor quality chicken breast popped in what is seemingly a blender, then these are for you! Tiny non-usable chunks of chicken swimming in liquid, half of which went in the bin because it was covered in white hard fat, resulting in not even enough for one person! AVOID!

Inedible! I’m not sure what is wrong with this product but the texture is absolutely vile. Wouldn’t buy again....