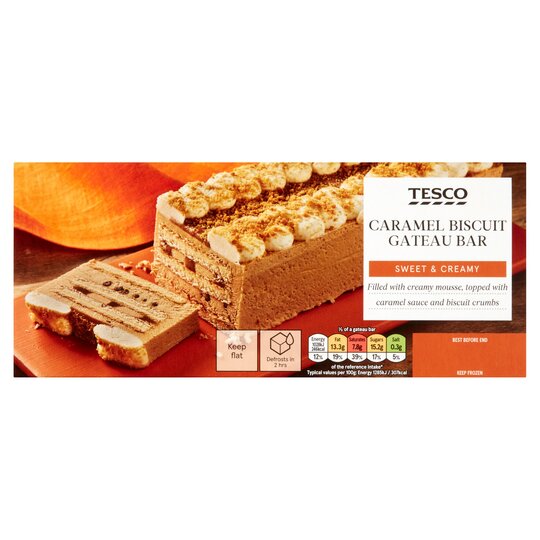 Important: If food has thawed, do not refreeze.Remove all packaging and place on a serving plate or tray. Defrost thoroughly for a minimum of 2 hours at room temperature or alternatively 4 hours in the refrigerator. Once defrosted use on the same day and do not refreeze. Keep frozen at -18C or cooler.

Can only describe as nondescript. Neither great or

Can only describe as nondescript. Neither great or awful. Certainly not what I expected and not up to Tesco's usual standards. Guests ate it but we're also unimpressed. Won't be buying again.

Brought for Christmas and will buy again!

Nothing over powering but it was a lovely caramel taste with a soft sponge. The different layers all worked well together & it was a pleasant pudding that doesnt leave you feeling stuffed

Everybody loved this and actually had people asking where I had bought it so that they could buy it, so disagree with the other reviewers. Think it's a great price for the size of cake too.

Tasteless Stodge. I had high hopes for this gateau but was sadly disappointed. There was no real texture or taste to it. I did try 2 slices at different times to give it a fair shot. So totally unimpressed I binned the rest. Yuk! Tasteless Stodge

This was one of the worst desserts I’ve ever had. The weirdest consistency and blandest flavour. Tesco should be embarrassed to put their name to it. I couldn’t even finish one slice and that’s a first for me!

Sadly this was virtually tasteless. Not sure where the biscuit was as all the layers were soft. We threw most of it away.

Like the others have said, tasteless drivel. Only bought it because the store freezers were broken and there ws no cheesecakes.

What a let down, the more I ate, the more I was expecting the flavour to come through but nope, it didn't get any better. Really disappointed with this, it looked really nice on the box but the flavours aren't there at all. The title and description is misleading... as far as I could tell there was sponge with cream and soggy crumbs on the top.

Tesco sold this product a few years ago, so it isn't new. Have one in freezer, hope it isn't a disappointment as the other reviewer said, was always enjoyed in this family. It is different from other gateau's, but makes a change from the typical chocolate and strawberry deserts. If all ingredients are the same then sure we will buy again.