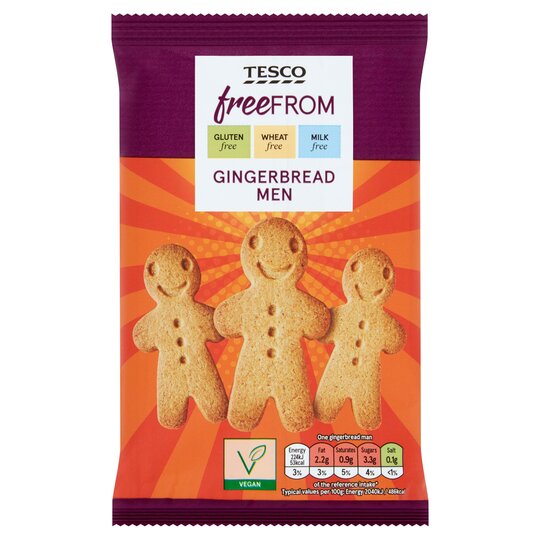 3%of the reference intake
Saturates
0.9g

5%of the reference intake
Sugars
3.3g

Store in a cool dry place and once opened in an airtight container.

Nice taste but most were broken . Much prefer ging

Nice taste but most were broken . Much prefer ginger biscuits as they are much better value. Gingerbread men are expensive

I love these little guys! Admittedly they are not very gingery but that makes them suitable for kids too. They are crisp and stay crisp in a container for ages - assuming they are around in our house that long! I have read the other reviews and it just goes to prove that you just can’t please some people.

No flavour of ginger - tasted more like cardboard. Threw them out to the birds.

I love these little guys as they’re great for packed lunches. It’s a shame they’re not divided and wrapped in couples. It would make it more user friendly if they could go straight into lunchboxes. Not a bad taste, but could have a bit more of a ginger punch as far as I’m concerned.

🤔 where is the ginger 🤷‍♀️ because I can’t taste it 😢 . I like the idea of them being small with plea try in the packet. But they need more ginger than what’s been put in .

I really liked them. I love gingerbread. Mine came perfectly packed and no heads lost. Will absolutely buy again

They were actually really quite nice, they're swee

They were actually really quite nice, they're sweet and firm but not hard and don't have an overpowering taste of ginger, but you can still taste it. They have a soft rounded flavour and pair beautifully with a mocha - nothing to scream about but most definately nothing to complain about either

Not very full of ginger, bland

They don’t really taste of all that much, they are just bread men. Not very gingery at all. They’re bland. They taste too sweet, and the texture is a little odd.