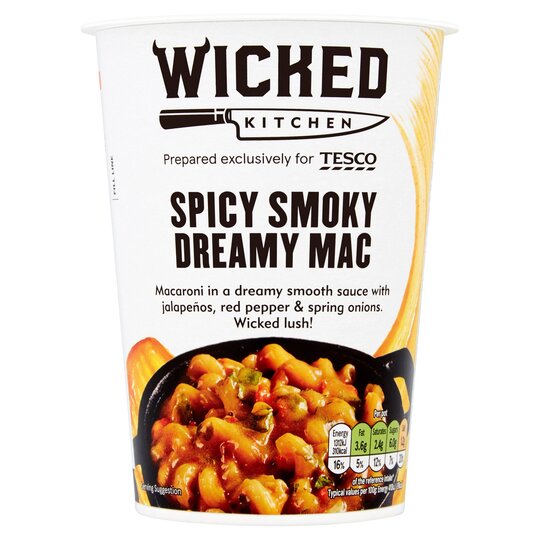 I’ve been lactose intolerant for about 6 months now (weird how your body changes) this is the best cheese flavoured Mac I have found so far…. I was starting to doubt I’d ever be able to enjoy the taste again as I loved my cheese, plus If you like a bit of a kick.. the jalapeños work very well and is a very tasty pot of pasta. 5 star all round, thank you Wicked

Love this, eat it regularly.

I followed the instructions and stirred really well after adding the boiling water, left for over five minutes, and stirred again, but the pasta was still crunchy as were the vegetables. I might even have eaten it like that if it had not smelled and tasted so vile and had the texture of the sauce not been so slimy and disgusting! Never again!

The smoky smell. The texture. The crunchy pasta which never quite cooked. The smoky flavour too. The chilli (which I like) so hot and overpowering. It was like a person who has lost their sense of taste and smell created this in the food development kitchens of Tescos. Utterly vile. Barely ate a mouthful and it went in bin. Far too much going on and none of which went well together. Fire the chef.

this was complete rubbish. I poured in the boiling

this was complete rubbish. I poured in the boiling water and 10 minutes later the pasta was still rock hard and crunchy. It's also just not very nice

What is up with the 3 star rating?

This is tasty. The product is exactly as described. It's a vegan-friendly Batchelors mac n' cheese pot, with appropriately labeled flavors. It's spicy (though mild), smoky enough to add a depth of flavor, and has a pretty strong jalapeno flavor, which I greatly appreciate as it often gets lost in the heat of a dish. I'll be eating these year-round from now on, but I bet they're killer in the colder months.

Utterly disgusting - so chilli hot it was like eating a mouthful of smoking dirt. In the bin after one spoon.

Smell of burning rubber anyone?

I bought this as a change for something to eat at work. As soon as I poured in the boiling water I realised I may not love it but I powered on through rather than not eat for the day....then my boss walked in the room and asked "where is that smell of burning rubber coming from?" I admitted defeat at that point....it really was the worst thing I have ever eaten.