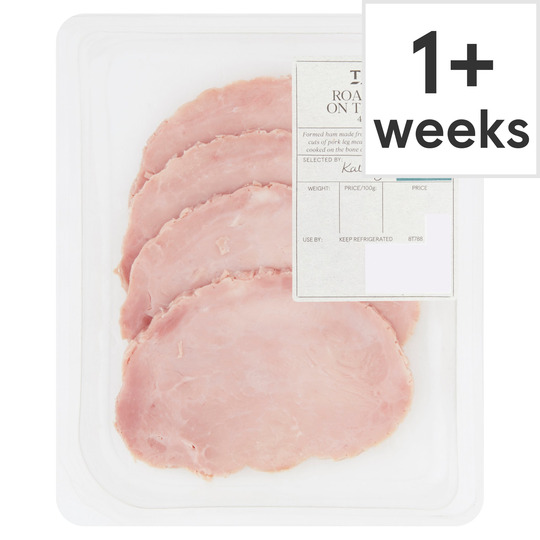 This item weight may vary, the price shown is a maximum per pack

This item weight may vary, the price shown is a maximum per pack

Made using pork from the UK.

I didn't read the description, so didn't realise until too late that several bones' offcuts were glued together to form this offering. Way overpriced and why added sugar? No wonder diabetes is at epidemic levels in the UK. Tesco should foot the bill for diabetes medication!!

Wet and tasteless. The finest range is much better quality but sadly wasn't available at the time of purchase. Very over priced for poor quality ham.

I believed that at this price Tesco was selling PROPER ham. I think this might even be pushing their luck with Trade Descriptions as this is nothing like the delicious roast ham on the bone that they used to sell. It is more like a rubbery, salty over-pink spam and isn't worth 4p let alone over £4. When you read the small print, this is reconstituted rubbish, moulded around a bone (for obvious reasons, none of them good) and then put in an oven. Don't waste your money--and Tesco: what ARE you thinking of? You won't impress your customers with such ghastly items.

Not really “ham on the bone”

How can “formed ham” be described as “ham on the bone” ? Only read the small print after discovering it was like tasteless rubber. Not cheap either. Misleading.

Made from formed meat not on the bone!

I assumed this would finally be real sliced 'off the bone' ham but once again it's FORMED. It also seemed cut in the entirely wrong way, it was thick chewy, formed, inedible and completely tasteless, we didn't even use one piece as a bite was enough, anyway you decide but we won't purchase this again.

This was the worst ham I have had from Tesco and I include the much cheaper cuts in that. It is tough tasteless with a rubbery consistency. Leave it on the shelf.