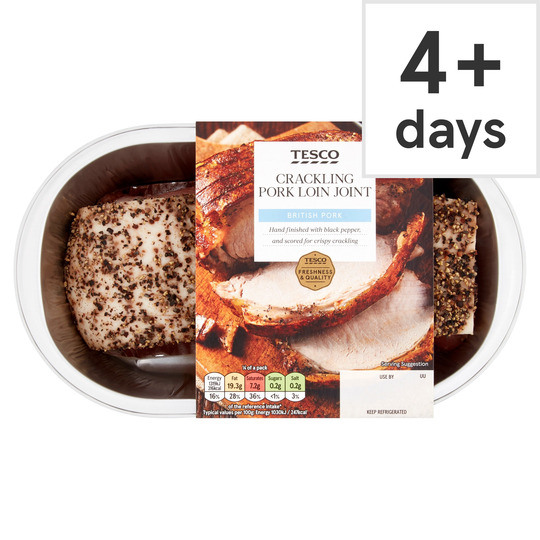 Suitable for home freezing. Ideally freeze as soon as possible after purchase but always by 'use by' date shown. Defrost thoroughly for a minimum of 12 hours in the fridge. Once defrosted use on the same day and do not refreeze. Follow the preparation guidelines above. Not suitable for cooking from frozen. Keep refrigerated. Once opened, use immediately.

Disappointing, meat was tasteless and dry and crac

Disappointing, meat was tasteless and dry and crackling didn't crisp up all that well despite following the cooking temperature and timing to the letter. Shan't buy this again

Maybe I was unlucky but not as unlucky as the pig

Sadly, the pig dies in vane. Crackling never developed. Suspect that the rind was too far below the edge of the supplied tray for a fan oven. Meat tender but....................

No crackling on ours!

If it's crackling that you are after don't waste your money; instead rather a rubbery, chewy rind.

Couldn’t believe my eyes when I took this out of the oven as the meat had shrunk so much. After cutting off the fat I was left with 3 extremely small slices of pork - enough for one sandwich!

Love thus joint. Simple to cook and very tasty. A regular on my shopping list.

Once cooked over a third was thick fat. The meat i

Once cooked over a third was thick fat. The meat itself was tasty, but there was so much fat to cut off that the joint became really small

I have had a few of these joints now - just enough for the other half and myself. Really tasty and moist. The crackling is divine, I follow the instructions and add a little salt to the rind before cooking. Beautiful - another lovely Sunday lunch for the two of us.

The peppered crackling is far too powerful.

We regularly order Tesco Pork Crackling Leg Joints which are delicious. In error I ordered this Crackling Loin Joint. It was a great disappointment, far far too much pepper. Only tried a tiny bit of the crackling which wasn't crisp and I choked. I had cooked it as per the instructions. Neither my husband or myself wished to eat it, not only was it unpalatable there was a serious risk of choking! Stick to the Crackling Leg Joint!

This was awful! Despite cooking it as per instructions it tasted horrible, was tough and fatty. I felt it was a cheap cut of pork dressed up to look expensive. Won't be buying it again.

Wash off the pepper and it’s delicious!

I buy this regularly - but it takes a bit of prep. I wash off the pepper - there’s far too much of it. I then roast the joint as per the instructions but while the meat is resting, I cut off the crackling and whack that back into a hot oven to crisp. The meat is always succulent, juicy and very tasty.