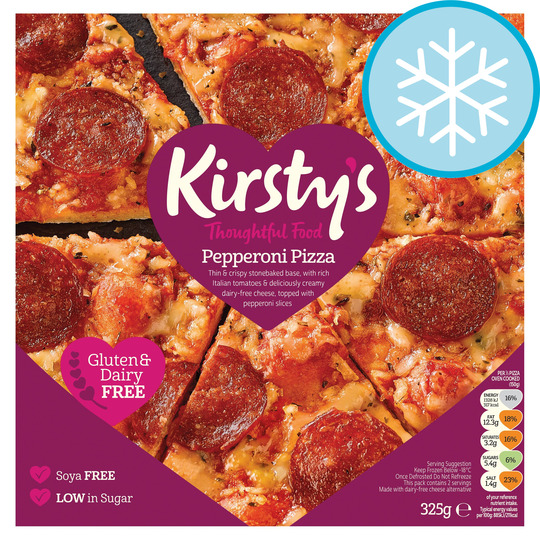 Keep frozen below -18°COnce defrosted do not refreeze

Oven cook
Instructions: The following are guidelines only. Always ensure the product is piping hot throughout before serving. For best results oven bake from frozen.
Preheat oven. Remove all packaging. Place the pizza onto a baking tray on the middle shelf.
180°C/355°F: 14-16 minutes
Fan 180°C: 12-14 minutes
Check product is piping hot before serving. Do not re-heat.

Made in Italy with Italian tomatoes

A strong choice for gluten and dairy free pizza.

This is a really strong choice for a gluten free and dairy free pizza. The pepperoni on the pizza is meat-based, so it is suitable for those who aren't vegan but are perhaps dairy intolerant. Reading some of the other reviews, it feels like reviewers may be directly comparing this to 'traditional' pizzas, made with gluten and dairy. I don't think this is a fair comparison to make based on the obvious differences between the two. For a 'free-from' pizza, this is by far one of the best I've been able to cook at home from the freezer. There is plenty of pepperoni on the pizza which is well seasoned, I found the vegan cheese to be similar in texture and flavour to the vegan cheese found at Pizza Express restaurants, and the tomato sauce was flavoursome. The base was tasty although a little bit hard on the edges near the crust - nothing a pizza cutter couldn't sort out though.

The best GF DF pizza i've ever had. I've tried all on the market and this is by far the tastiest.

By far one of the best gluten, dairy and soya free pizzas on the market. I highly recommend trying it, it's perfect for my son who is intolerant to gluten.

I had to give one star just becsuse I had to , let

I had to give one star just becsuse I had to , lets just say the bin had more than i did , Disgusting , tasteless and before i even took a bite the smell gave it away , this is the worst ever pizza ive ever bought i wouldn't have this again even if it was the last food on earth , I've had microwavable ones that taste better than this FACT , save your money and disappointment .......avoid

Awful. Hardly any toppings, I had to put my own toppings on and the base was wafer thin. Completely over-priced and underwhelming.

Awful greesey slop, tastes really bad. If you can have dairy stick with the Goodfellas.

Excellent for what it is!

As someone who is avoiding gluten and cannot tolerate dairy it was really nice to have a pepperoni pizza! Base goes dry when cold and cheese does taste dairy free (but I'm used to that now) 😊 if reviewing against a regular pizza then I'm not surprised about the bad reviews.

Watery and tasteless. Would not recommend.

It has a very weird taste I would not recommend.

Was hoping for a nice alternative to pizza, saw the reviews, but bought regardless. The crust on the pizza was stone hard, the 'cheese' is definately not even close to cheese, had a consistensy of sauce. Needless to say, I'd rather just buy a regular pizza