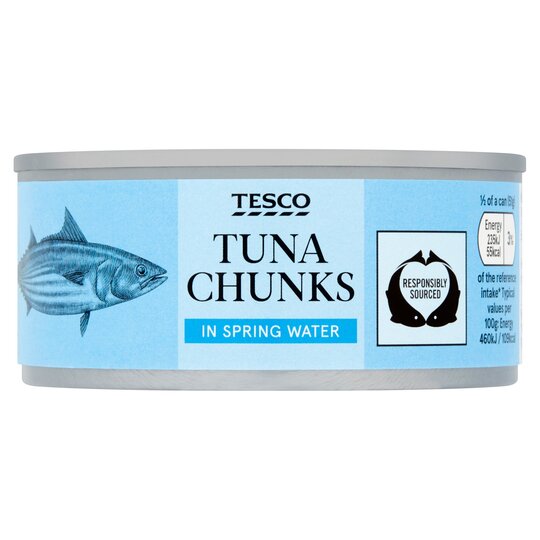 Store in a cool dry place. Once opened, transfer unused contents into a non-metallic container, cover and refrigerate. Consume within 2 days.

I initially though that I had just been unlucky with the first can I opened, but further cans have all been the same. How has anyone got the nerve to describe this as be tuna CHUNKS? Every can I have opened has contained finely flaked MUSH. Not a chunk to be seen. Might save you the effort of mashing it for a tuna mayo, but I wanted was what it said on the label, CHUNKS. What on earth is happening to Tesco quality control if products are so blatantly mis-described.

Excellent value, just as good if not better than other supermarket brands.

Not a fan of tuna personally, but my cat loves thi

Not a fan of tuna personally, but my cat loves this stuff and I give it to her as a treat.

Smelt awful as soon as I opened it, wouldnt dare to even try to eat it, was 3 tins all the same from the same batch. Cant even get through on the phone to get a refund

Pretty good! It made a nice bowl of tuna, sweetcor

Pretty good! It made a nice bowl of tuna, sweetcorn and mayo.

Not chunks these are flakes. Need better quality control.

I bought four tins and they're all bits, already m

I bought four tins and they're all bits, already mashed up so barely any flesh in the tin. One tin made one large sandwich which is really poor. Also not MSC certified which is a poor show.

Had bones in them

Bought four tins, three of them had bones in.