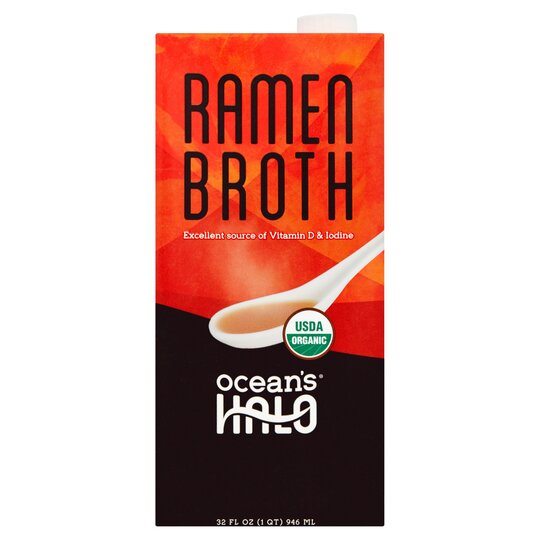 Refrigerate after opening and use within 7-10 daysBest before end: see top

Produced in the United States

DO NOT MICROWAVE IN CONTAINER!

If I could give this no stars I would. One mouthfu

If I could give this no stars I would. One mouthful and the lot ended up in the bin! Awful taste, awful colour, nothing like Ramen, avoid at all costs,

This is not the typical brown soupy broth I'm used to, it's white. That isn't the problem with this. No matter how I cooled it, it had a really horrible bitter aftertaste. It may be the seaweed, or some mind of mushroom but it was so bad, I had to chuck it!

Way better than I expected

I normally make ramen from scratch (yep, even the dashi stock) but I bought this ages ago out of curiosity, forgot it was at the back of the cupboard, and only got around to trying it today. I now have to eat my words about vegan products. It's got plenty of umami and the soya milk does give it a surprisingly rich creaminess. Admittedly, I added chicken, tatsoi, shiitake, red peppers, and a few grinds of gomasio (no noodles this time) but I did taste the broth on its own and it was pretty good. It actually made me look up recipes for other Japanese soya milk broths and stews because it was that tasty. I knocked off a star because £4 is a bit steep, but I'd probably still keep a carton as a standby for a quick meal.

Yack ,awful ,who can eat this .Its gone straight into bin !

Not nice at all. I like all the ingredients but s

Not nice at all. I like all the ingredients but somehow they made it taste dreadful ... and the price is astonishing. As someone else said, you'd be better off with a stock cube.

Great taste for a healthy option

For a low calorie option this tasted much better than expected. It's not animal based so won't have quite the same flavour as those, it's more of a miso taste with a rich creamyness.

A stock cube would be just as good and a great deal cheaper!

Me and my family LOVE this Ramen broth! It’s so delicious and easy to use. I soften some veggies with Sesame oil first, then add chopped garlic and sometimes ginger, then add dark soya sauce. Pour the Ramen broth over everything and warm through. I then add some fine noodles and voila! Authentic tasting Ramen noodles at home and a very happy family:)

This is awful. It's got the strangest after taste. I had to throw it away because it was inedible. Such a disappointment because Tesco didn't have any other alternative.