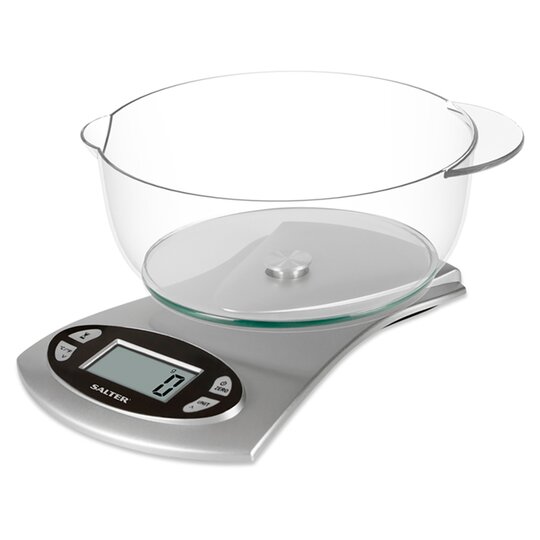 I had given away all my baking tackle to younger family members..bought with having to self-isolate I felt inspired to bake again.These scales are excellent and so easy to convert from ounces to grams etc..

Please tell me how to turn it off. I lost its book

Please tell me how to turn it off. I lost its bookLet. Erg happy with it.

I have had this for some time and could not return it because I did not realise the problem until I started using it. The clock cannot be turned off so the battery runs out every week. I now take it out after using it and then put it back when I want to use it again. What a nuisance.

There is no on-off button and batteries last no time at all. It will be cheaper to junk the scales and buy some with an on-off. Googled Salter on how to turn off - says to hold the on-off/ zero button for two seconds. Doesn't work

Purchased scales which looked very modern but have not worked out how to switch them off. The battery has already been replaced twice in less than 6 months. Not sure why I need a clock function on set of scales which seem to be shortening battery life.

Cannot be turned off

I bought these just under three weeks ago and the battery has already gone because you cannot turn the scales off because of the clock feature. I do not want to have to keep removing then replacing the battery so will be returning these.

Brought this brand name as kept buying cheap ones . Battery life rubbish. No way of turning it off??? What's that all about???

Similar to other negative reviews that I've unfortunately only just seen. The battery is next to useless, has given up the ghost after only around 2 weeks of usage. I wanted digital scales for better accuracy and I've had similar ones before but never with a battery this poor.

I like these scales BUT the fact that you can't turn off the clock etc (permanently on) means the batteries run out ridiculously quickly - BIG design fault. Who on earth wants to have a clock on scales?!!

Terrible battery life! Dead in a matter of weeks!

Wish I'd read the reviews on here! The battery goes flat after about 2 to 3 weeks. You can't turn it off and unlike any other clock timer, it burns through the battery. Nice kitchen scale but useless if the screen is blank when I want to weigh something.