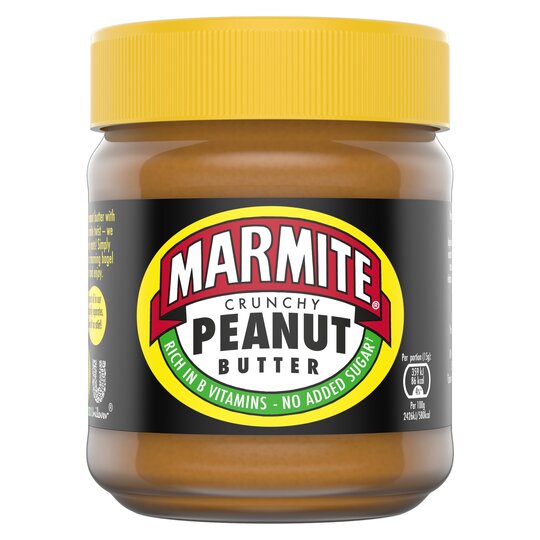 Not a strong marmite taste but peanut butter how I remember it with the oil on top. will order again

Tasty Twosome. A source of B12 too.

Yes! Hey Vegans! This tasty product is a source of B Vitamins including B12

Perfect balance of peanut butter and marmite, tastes exactly how I did it when I used to buy them separately but now it is there and ready. Heaven in a jar. DONT BUY IF YOU DONT LIKE MARMITE BECAUSE IT ACTUALLY HAS MARMITE TASTE.

Won't be buying this again!

It was awful, a waste of perfectly good jar of peanut butter at over 3 x times as much. }:o[

The worst peanut butter I ever tried - salt, salt

The worst peanut butter I ever tried - salt, salt and the even more salt. Avoid.

Frankly, I'm addicted to it. I originally thought it would be awful but was offered a sample in a supermarket and since then, this on toast is my daily breakfast. And this from someone who has historically skipped breakfast. This has a great depth of flavour, neither overpowers the other, it's just the right balance. I'm not sure I'd achieve that balance by attempting the ratios myself with individual products. Try it - you might be surprised!

Very tasty marmite, especially with peanut butter as its one of my favourities in general. It has a nice texture when spreading on butter. I would highly recommend if your a fan of peanut butter and marmite. [This review was collected as part of a promotion.]

Marmite peanut butter, where do I start! Well I think you have to be a marmite fan to enjoy this. Peanut butter was perfectly crunchy and the marmite flavour was distinctive, I was concerned that you may not be able to taste it, but you could. Give it a go, you won’t look back :-) [This review was collected as part of a promotion.]

I love peanut butter, and I love Marmite, but putting them together does nothing for either.