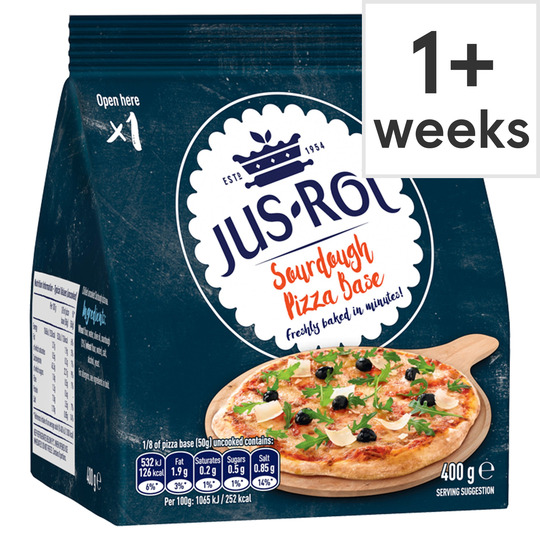 Keep refrigerated below 5°C. When opened use immediately. Do not freeze.

Terrible do not buy just because it's on offer

Terrible do not buy just because it's on offer. Far to salty wish I had tasted the dough before I added the toppings , I would have stopped and binned the dough , the dough is just full of gluten and salt even the crust did not rise.would never recommend this product .

Do not buy. This product is a disgrace. It’s fake and tastes horrific. So angry - wasted quality ingredients on the toppings to be let down by a company just trying to latch on to gourmet food. Stick to pastry - you don’t belong in the pizza game. Hate this product

Decided to try this because it was on offer. Mistake. I'll be going back to my usual dough. This one was dry and did not taste of anything.

Can’t use same day and get a sourdough flavour...

First it don’t taste like sourdough, but it does smells like it. Over lockdown I’ve been learning how to make my own sourdough and it tastes and feels like an un-matured dough. I’ll order again but this time I’ll leave it out overnight in a warm place so the flavour has a chance to develop, that might do the trick :) Thinking about it, they can’t sell “Matured dough” as the taste gets very heavy quickly past the first 24 hours in a warm place. The cooking makes the crust hard and very crunchy if you follow the instructions and Im not convinced they used 00 Italian style flour which might be why it’s so hard. I normally cook my sourdough pizza’s in a 220 oven for 15mins, for a 300g ball of dough. So next test I’ll treat it as I would my home made dough.

Its generally Ok, shaped into one pizza easily wit

Its generally Ok, shaped into one pizza easily with a little flour. Loaded up with toppings and placed in fan oven for 20 minutes rather than the 25 stated on the pack. Wish I'd only given it 15 as the crust was very hard and the bottom difficult to cut. Maybe my fault as cooked on a pizza stone in the oven rather than on a metal vented pizza tray. Won't buy again

This was super easy to use. Lovely crisp crunchy crust.I really liked it, and would buy again!

After reading all the negative reviews I was quite

After reading all the negative reviews I was quite sceptical about trying this but thought I would give it a chance and make my own mind up. I have to say was really impressed. 1 pack of dough makes 1 large pizza or 2 small/ medium if cut the dough in half and shape . Good value and fun to make too. Would recommend

Hideous excuse for a pizza base. 3% sourdough!!!!

Hideous excuse for a pizza base. 3% sourdough!!!!!!!! such a measly content why bother putting any in at all. You can not call this a sourdough pizza, it doesn't taste like one or look like one it simply isn't one. yukkkkk I feel sick

Absolutely fantastic! So easy to make and no nasty ingredients! Will definitely be buying again. One ball made 2 medium sized pizzas.

The dough worked really well, I split it to make two smaller pizzas which is more than enough for two people. The crust comes out really crispy and chewy. I find that heating the base initially in a frying pan before grilling gives a much better result than cooking fully in oven.