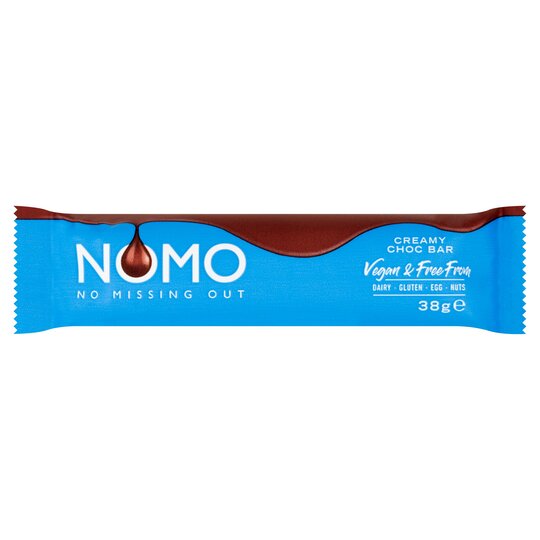 Not chocolate, not fun and too expensive !

It’s not the 90s any more and the UK’s chocolate market has markedly improved to suit its increasingly sophisticated tastes. But then again, this isn’t really a chocolate bar, it’s a lifestyle product and as with all lifestyles choices, there are tradeoffs. Yes, money is one of them, it costs more than even what I would regularly pay for “true” chocolate, but as an indulgence it’s supposed to taste nice, and it doesn’t. It’s a substitute, it’s not chocolate, all of the fun has been sucked out of it, it says so on the front: “Free From Dairy, Gluten, Egg and Nuts” ! It reminds me of the time I worked in a pound shop and behind the tills was a tonne of own branded chocolate, I thought I’d hit the jackpot because stuff like that never went out of date and it was a huge stash, but unfortunately there was a reason, it was like eating chalky cement mix, awful stuff. Nomo isn’t that bad, but it’s a shame to unwrap it and it doesn’t hit the price point to satisfaction ratio: it’s just disappointment in a bar, especially for those who need it on demand, which would only compound matters. Buy real chocolate or don’t bother at all.

WOW. Been vegan for a few years and tried hundreds

WOW. Been vegan for a few years and tried hundreds of ‘chocolates’. Saw this all over everywhere online and thought I wonder if it’s just new hype? But no this is the best vegan chocolate I’ve ever tasted and the only one I’ve so far Tasted that literally just tastes of a regular milk chocolate! I don’t know how they get that creamy ‘milky’ taste that even the best of the other vegan options seem to miss but it’s wonderful. They’ve mastered the texture too that soft snap, I saw someone compare to A famous space named chocolate and I see what they mean. I always have loved Another well known vegan option and it is still fantastic but this is just amazing that NOMO have managed to create a ‘milk chocolate’ that even fooled my pickiest of tasters. The other flavoured options are wonderful too :)

Regular Price £0.40, Clubcard Price £0.36. Offer valid for delivery/collection until 26/01. The discount won’t show in the guide price but don't worry, it will be taken off and show on your final delivery note.

Regular Price £0.40, Clubcard Price £0.36. Offer valid for delivery/collection until 26/01. The discount won’t show in the guide price but don't worry, it will be taken off and show on your final delivery note.