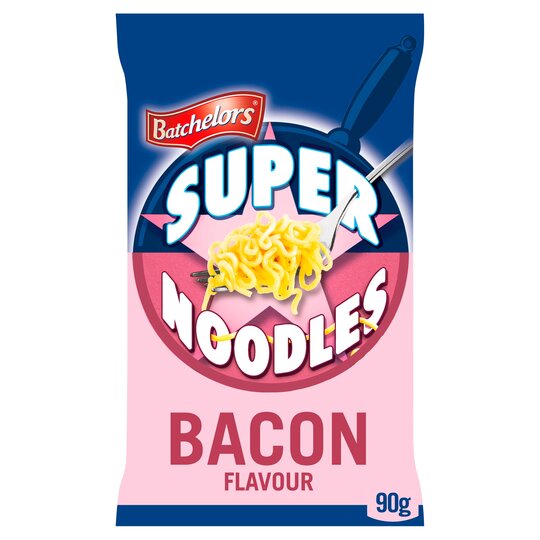 of the reference intake*
Typical values per 100g: Energy 634kJ/151kcal

DO NOT USE IF PACK IS OPEN OR TORN.

Bacon flavour does not taste right

Not sold on the bacon seasoning that came in the pack, it just didn't taste right. Because I had purchased more than 1 pack of the noodles, I refused to use the seasoning second time around.

Not what I expected

I'd normally buy Batchelors so I expected this to be on par with their other products but I wasn't keen on this. There was something not quite right worry the flavour or taste and I ended up leaving some.

Nice snack at dinner or for tea

Bought as part of a promotion better than expected

Bought as part of a promotion better than expected

Very very tasty and was great as an addition to my meal!!

The flavour packet had a strong smoked bacon aroma. The noodles were fine, but the bacon flavour was horrid. I followed the pack instructions making it with 300ml of boiling water and I thoroughly stirred the flavouring with the water and then left it for 5 minutes.The seasoning lacked any flavour or depth. There was no saltiness or meatiness to it, the artificial smoke flavour tasted metallic. This product was bought as part of a promotion.

This is my favourite flavour of super noodles.

This is my favourite flavour of super noodles.

Quick and easy to prepare. These had a nice bacon

Quick and easy to prepare. These had a nice bacon flavour and are good value. [This product was bought as part of a promotion.]