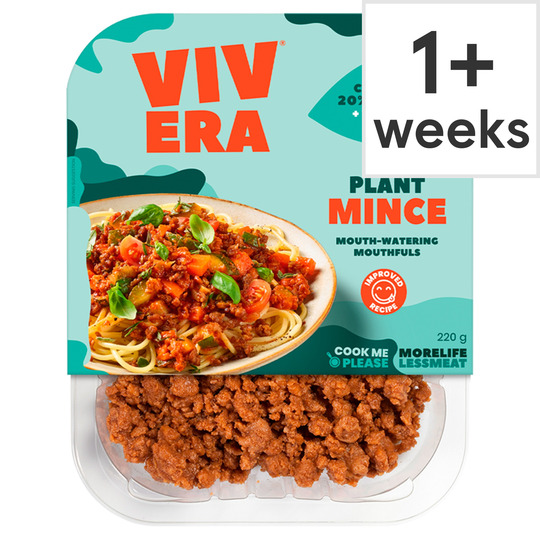 Oven cook
Instructions: Heat in a pre-heated oven for minimum 4 minutes at 225°C

I love this Vivera Veggie Mince, it has lots of flavour and the chewy texture is just right. Best veggie mince yet.

Used to love Vivera mince, but really don't like t

Used to love Vivera mince, but really don't like the new recipe, as the mince is really chewy

Used to love this mince but since they changed the receipt, it’s awful.

The best mince yet, texture brilliant!

After trying the VIV ERA kebab...what ever it is..and being really impressed, I thought I would give this a go. I'm so happy to say it's the best vegan mince yet. Absolutely no weird taste or after taste...get the seasoning right and it's so good. Texture is brilliant even when char-grillled under high heat (it caramelised simular to meat) and while i'm not vege/vegan I am using 220g of this to 100g of beef (in the bid to reduce meat by 50% or more) and I literally cannot tell the difference. I'm reducing meat bit by bit and I will be trying just this next time. Excellent product and certainly the best thing I've come across to helping curb the meat.

I've tried a fair number of these meat free substitutes, but this one is simply the best! Cooks brilliantly, has a lovely texture and even my fussy meat eaters have been fooled. It's as close as you can get to the original thing. It's just fab.

Good texture but too salty.

Texture holds up but the salt content is so high (three times the amount of salt per 100g vs. most meat mince) it makes it hard to cook with. Even without adding any salt the final dish was a bit too salty.

This is the best vegan mince we've tried by far. The texture isn't mushy unlike other brands and the taste is pleasant. Used in a vegan chilli con carne and I would be surprised if a meat eater would be able to tell the difference (I ate meat for many years myself), particularly with the addition of vegan beef Oxo. So pleased to have found a mince substitute that we're confident in using time and time again.