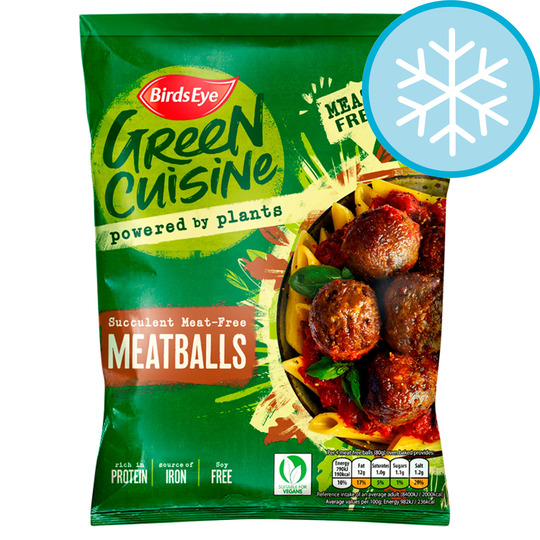 Cooking Instructions
Instructions: Tastiest when Oven Baked Straight from the Freezer.
Please ensure food is cooked until piping hot.
These instructions are guidelines only.
Do not refreeze after defrosting.

New recipe, nasty taste, nothing like the original Birds Eye veggie meatballs, which seem to be no longer available. Even the dog wouldn't eat these. No thank you, I'll go without.

I tried these and was disappointed by the strange taste and texture.A one of .I will not be buying them again

I love these. Other reviewers are wrong - great with a tomato and spaghetti sauce, as well as with mash and gravy. Lovely.

Really not a nice taste at all, Soya based is better for me. Strange texture and taste

These are foul! They have an oddly uniform, grey/brown colour, no discernable vegetable pieces and a smooth, pastey texture. I used them in a bolognese, the pack recommended baking them first, but it just made them crisp on the outside with that smooth inside. I couldn't make out a specific flavour, because the texture was so off-putting.

I have no idea what the bad reviews are about!

I really have no idea what the bad reviews are about! They made me skeptical to trying these, but as they were on offer I did anyway! Out of all the meat substitutes I have tried there are only a handful I would buy again, and these are a definite buy! The texture is really similar to meat and they don't have the off taste most other plant based products have which means you can eat them plain without having to disguise them in loads of sauce. They are lovely and 'meaty', the texture is right and the only way you can tell they aren't meat is the slightly dryer texture due to the lack of natural fats from meat. I am not a vegan or veggie and I would happily buy these over the meat options again!

Tried them and totally agree with others, bring back the Quorn swedish meatballs

Not very nice at all

I bought these hoping they would resemble vegetarian meatballs that have been discontinued by a well known vegetarian ‘meat’ producer. Unfortunately they did not. The taste is completely off, I can’t even explain the taste, other than the fact that it tastes like they’ve tried to disguise the taste with herbs. They don’t taste meaty or tasty in any way. The texture is very soft, which was a little off putting. Overall I was very disappointed!

Delicious, taste better than meat, and I’m not even vegetarian