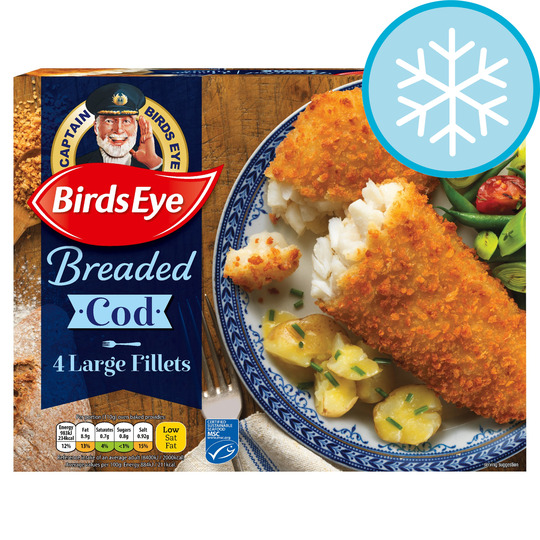 Oven cook
Instructions: Tastiest when oven baked straight from the freezer.
Pre-heat the oven 220°C, Fan 200°C, Gas Mark 7
Place on a baking tray in the middle of the oven.
20 minutes
Crispy and golden
Serve with your favourite sides
Please ensure food is cooked until piping hot
These instructions are guidelines only
Do not refreeze after defrosting

Tasteless and no where near the size indicated on

Tasteless and no where near the size indicated on the box. Tesco own brand much better.

These are the worst fish pieces ever. They are not large at all, they are like mashed fish then formed. I couldn't eat them they were just so substandard. Even the cat said no. I would avoid these at all cost. Tesco brand is far better.

Can't believe this is cod. Horrible strong taste like pollock. Thick coating, thin fish. The battered haddock large fillets are really good but wish I hadn't bothered with these. Don't waste your money.

Did not resemble the advert

I have cooked the breaded cod at several different oven temperatures but not once did the fish resemble the lovely white flakey cod in the advert, so was very disappointed.

these are an absolute disgrace, there disgusting the coating is minging and whats all this of everything goes in the oven, THATS WHAT MAKES THEM TASTE AWFULL, in the late 70s early 80s birds eye done a product called 4 cod steaks in batter, HAD TO BE DEEP FRIED, couldnt get enough of them, they tasted gorgeous 100% better than the rubbish your selling today, get back to making them and give people the choice instead of forcing oven cooked rubbish on them

I want to know where and how this fish is caught. Packet said details on the web site. Went to site, NOTHING FOUND. Left it in the freezer and brought another make. Have NOT got time to go to website while shopping so PUT THE ONFO ON THE BOX. !!!!

Tasteless. Worst than tasteless I can’t even finish a full fillet due to the distaste.

disgusting what is the thick glutinous coating? which weighs more than the fillet, as a retired ex chef how can you produce such an awful product? what happened to the dusting of breadcrumbs

This is the worst fish I have ever brought. It was a bread crumb cocoon with some grey matter inside I do not think it was fish. I had to throw it away along with the other 3 pieces