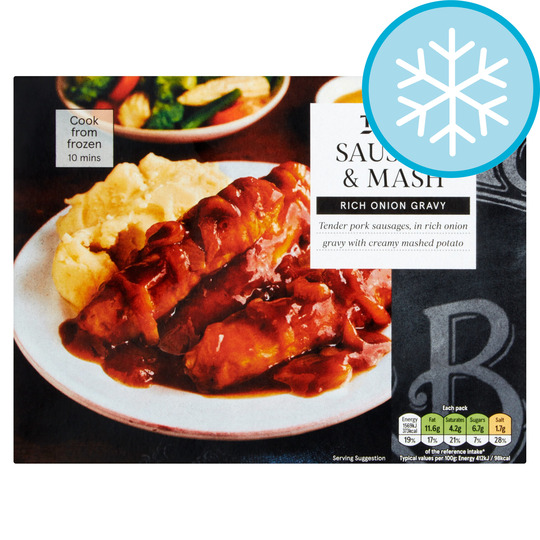 Keep frozen at -18°C or cooler. Important: If food has thawed, do not refreeze.

Instructions: 200°C / Fan 180°C / Gas 6 41 mins Place on a baking tray in the centre of a pre-heated oven for 30 minutes. Peel back film lid, stir both sides and re-cover. Heat for a further 10 minutes. Leave to stand for 1 minute after heating.

Produced in Republic of Ireland, using pork from ----

Caution: Although every care has been taken to remove bones, some may remain.Caution: When removing lid after heating hot steam may escape.

I wish I'd read the reviews before buying this. Gravy tasteless, mash tasteless, sausages tasteless. The sausages in particular are dire and eating the whole meal reminded me of eating whilst suffering from a bad cold - no flavour. The only plus point is the peppery aftertaste.

If I hadn't so much on my mind I would have remembered that I bought this some time ago, reviewed its dreadfulness and had a refund. Having ordered it again I served it to my husband. He is a man of few words but took one mouthful and used his word ration for the evening. It is not hyperbole to say that it is not fit for human consumption if you hold to the premise that you are what you eat. The potato is bland because it doesn't have butter and if there is salt there isn't enough. The 'sausage' tastes like soggy cardboard. I don't feel that I can ask for a refund again but as it grieves me to waste any food the meal is going into the food caddy to be collected tomorrow and used to generate energy, so I and it have at least made a contribution to alternative forms of energy. Avoid this product.

Basically you get what you pay for here, gravy is really not very nice, potatoes just fake mush and looked like a bar of soap. Not inedible but certainly not appetising either.

After enjoying Tesco’s frozen All Day Breakfast, which came with rave reviews, I decided to explore their frozen ready meal range. I wished I’d read the reviews on this one first... I can only echo how appalling this sausage and mash is. Absolutely nothing good to say about it. It’s kinda like eating leftover sausage and mash that’s been in the sink and mixed with dishwater. If you enjoy hospital food in your home environment then you’ll like this. Otherwise don’t bother.

Has anyone at Tesco tried this ? This is the worst ready meal ever ! The sausages are tasteless, the mash is bland, the gravy has no onions in it. Nothing like the packaging. Disgusting !

Sausages that you don't want to eat twice!

The overall quality of this dish was let down by sausages that were mostly cereal bulking rather than meat. They simply did not taste like real sausages and in fact were so unpalatable that I left the second one. A simple tasty dish had been ruined by cheap ingredients.

The only edible part of this meal was the mash. The sausages were vile, both in taste and texture. Wouldn't buy this again.

Tasteless mash, not much else in the sausage other than air. Very disappointed. Only bought for convenience one day and wont be buying again.

A BIT BORING, SAUSAGES TASTED LIKE THEY HAD A LOT

A BIT BORING, SAUSAGES TASTED LIKE THEY HAD A LOT OF RUSK IN THEM, I HAD TO ADD A LOT OF SALT AND BLACK PEPPER TO MAKE IT MORE EDIBLE, GOOD THAT ITS JUST 373 CALORIES THO. I HONESTLY WONT BUY IT AGAIN.