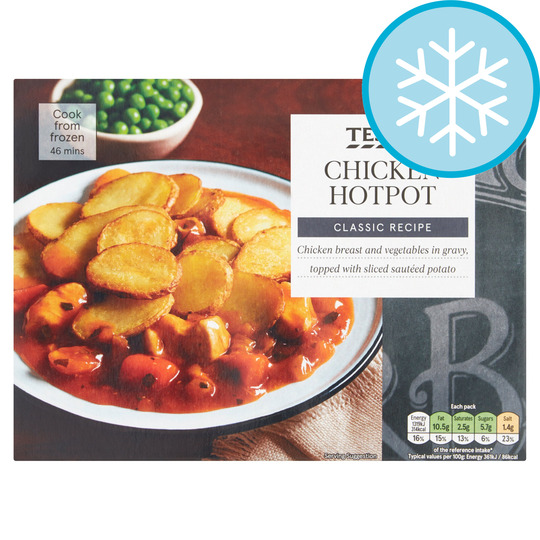 Instructions: For best results oven cook from frozen. Remove outer packaging and film lid. 200°C/ Fan 180°C/ Gas 6 45 mins Place on a baking tray in the centre of a pre-heated oven for 45 minutes. Leave to stand for 1 minute after heating.

Should be called potato hotpot not chicken.

This so-called chicken hot pot was very bland and tasteless and only contained 3 to 4 small pieces of dry chewy chicken. It was mostly filled up it with slice potatoes watery gravy and a few carrots. Sorry not for me.

if you dont like salt, then buy this. it was tasteless, about 4 pieces of chicken, the rest veg. dreadful

It was tasty enough for me and the veg were ok although I prefer potatoes without skins, but the chicken was the big let down. No words to describe it except to say I only ate 1 piece as it was hard and chewy. I would rather pay more and have some real tender chicken.

Good alternative to home made.

Surprisingly good. Plenty of chicken and gravy, well seasoned, and generously topped with potato slices which were nicely browned. I would have preferred more chicken and sauce, but it's a good meal for the price.

Too much potato. The gravy was watery and tasteless. There was no herby topping and the 3 small lumps of chicken were processed and also tasteless. It was cheap I will admit but a gravy of Bisto or Oxo would have helped to season it a little. It was a trial and I would have ordered these ready meals every week to save me cooking now I am on my own - but I will not risk buying any more of these type of meals.

Awful reviews for no reason.

Both the mince and chicken hotpot are proper good and the herb top is good too, you just need to cook it right, don't understand why everyone is moaning.

Looked lovely, smelt good too. Oh but such a disappointment , so very lacking in taste, as if all herbs salt and pepper left out. Bland and boring .

Forced to give one star: Deserves none! The dish itself is unpleasantly tasteless. That is not the worst thing about this product! It has a large sprinkling of grit on the top, making the texture and taste VERY nasty. I left one uneaten and threw away two more unopened. Very, very nasty! To be avoided! 🍌😷 NB The Beef Hotpot is just the same.