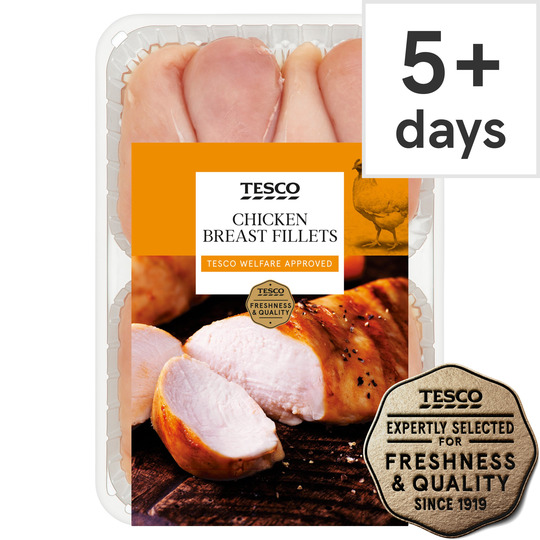 Instructions: Pan fry & Oven Chilled: 190°C/Fan 170°C/Gas 5 25 mins Pre-heat oven. Brush chicken with oil and season. Place in a pre-heated frying pan and seal over high heat for 5 minutes, turning half way. Transfer to a baking tray and place in the centre of pre-heated oven for 25 minutes.

Produced in the U.K., Origin UK

Hard inedible bits throughout the meat!

Inedible. I’ve never come across chicken breasts like it in all my life. There’s something disgusting running through the meat where I had to keep spitting it out. The smaller pack .I usually but wasn’t available so I chose this larger pack. I won’t be buying these again. I’ve thrown them away. I bought the corn fed free range on my last shop with no problems. I prefer to buy those anyway when I can afford it.

The worst chicken I've ever gotten it practically

The worst chicken I've ever gotten it practically rotted by day 4 so 5+ days ain't true, there was more than one chunk of bone in there and I had to cut so much grizzle off to even have a workable chicken breast

A couple of the fillets had that awful 'spaghetti' like texture. It's probably ok to eat but I cut it off because it really didn't look nice.

Awful. Rubbery and tasteless. What has gone wrong?

I have bought and eaten Tesco Chicken for years, but something has changed recently. It is now quite likely to be rubbery and tasteless than have the proper texture and taste that it should have. This first started with the pre-cooked chicken, which I have reluctantly stopped buying, and now it's the same with the uncooked. Something has gone badly wrong. Tesco needs to look into this matter quickly. Chicken is a real staple for many shoppers.

After the last purchase we won't be buying any more chicken from Tesco. Inedible straight in the dustbin. They need to read the reviews and change supplier maybe?

Cooked for over 1hr and 30 mins in a oven dish 1 breast each were raw in middle very rubbery went in bin won’t buy again. Have tried with them on 3 separate occasions.

Not up to Tesco standard

First time I’ve left a review, but quite unpleasant chicken, lots of sinew running through these oversized fillets. Spent ages trying to trim up, & even after slow cooking for few hours, it wasn’t great. Also I flattened them out to make Cajun chicken burgers & they were rubbery! Unimpressed...

This was part of my weekly purchase, but recently

This was part of my weekly purchase, but recently noticed that on occasion there may be a couple of larger, darker in colour fillets. When you cut them they our tough, and are even tougher after cooking with a weird chewing texture on the teeth. It ruins the dish because some bits are normal and others you think yuck! my son has asked not to have these anymore. Hopefully this is just a blip in the supply and i will try again soon, but for the time being, its frozen breasts for me!!

Not sure what's happened with these...I bought them all the time & very pleased, then the last couple of months several pieces are tough, rubbery & unpleasant to eat. Have complained twice as not sure if it's a supplier issue? Until it's resolved I'm buying elsewhere :(