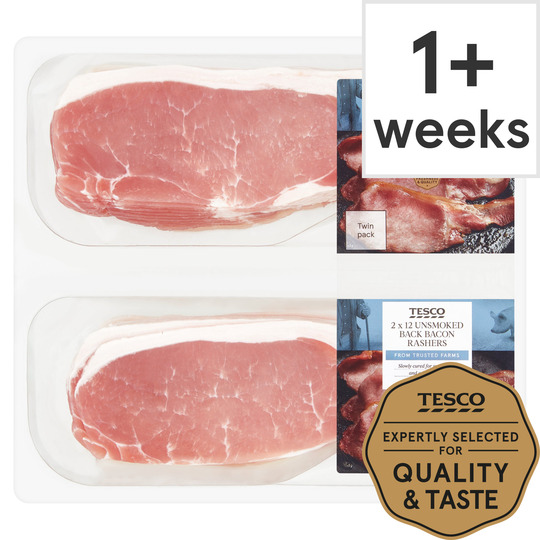 13%of the reference intake
Saturates
3.4g

17%of the reference intake
Sugars
0.1g

28%of the reference intake

Suitable for home freezing. Ideally freeze as soon as possible after purchase but always by 'use by' date shown. Not suitable for cooking from frozen. Defrost thoroughly for a minimum of 8 hours in the fridge. Follow the preparation guidelines above. Once defrosted use within 24 hours and do not refreeze. Once opened, keep refrigerated and consume within 3 days and by ‘use by’ date shown. Keep refrigerated.

The bacon is now ridiculously fin and has been the last 3 orders now such a shame but it now just reminds me of the bit in open all hours where Arkwright cuts meat in his shop as thin as he can to get more out of it. I will be getting from elsewhere from now on

This bacon is cut far too thinly. It tastes nice and grills nicely too but it's just too thin.

My Husband loves this bacon not too thick but lovely on sandwiches or wrapped around a chicken breast and roasted. Not too salty full of flavour. Do not usually review anything, but, due to quite a few unfair ones listed, he thought as a bacon butty and great british breakfast eating connoisseur he asked me to set the record straight :)

I've always bought this bacon but I've had to stop. It was getting to the point we were throwing more away than eating. For some reason they have started putting 12 slices in each pack which means the slices are that thin they just rip. I wish I could upload an image of the pile of ripped bacon I took, littrelly not one piece came out. I started getting my bacon from CoOp but while Tescos British bacon is on offer with Club Card i'll buy that.

ONE OF THE PACKS ALWAYS HAS MORE FATTY STREEKS THR

ONE OF THE PACKS ALWAYS HAS MORE FATTY STREEKS THROUGH IT . WHEN ODERERING ONLINE MEANS WE DONT ORDER ALL THE TIME . WE HAVE TO SHOP IN A NEARER SUPERMASKET TO GET WHAT WE PREFERE.

Bacon so thin it rips as you're taking it out of the packet, and dry frying it led to the rashers shrinking to half their size while sitting in a foul smelling deep salt water soup!! Absolutely disgusting- it ended up in the bin. Don't waste your money!!

Did not read the details carefully, thouht it was 2x8 but its 2x12. As a consequence the slices are so thin and have so much fat that they are very difficult to handle and you end up with a pan of bits and pieces where they have fell apart as you try to turn them.

Vile, made us feel very sick after consuming. We wont be buying these again.