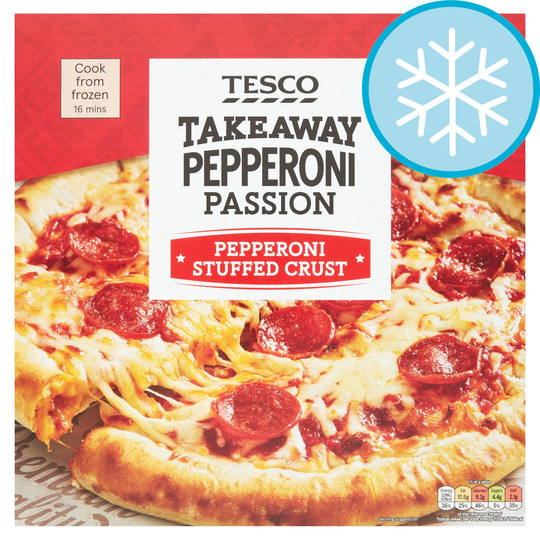 This pizza is fire

This pizza is fire

simply the best frozen pizza ever!!

Poor compared to others

Do not buy this pizza, it is horrible Buy the Tesco Deep Pan pizza or the stonebaked, both are far better. This thing has a stuffed crust filled with some red sauce, not cheese, and the entire pizza tasted of pepperoni water rather than something meaty. Too much dough as well. The Tesco Stone baked and deep pan are good for their cost zone though. Want to spend more get the goodfellas stonebaked 340g one.

Possibly the worst pizza I have ever had. Absolutely disgusting tasteless toppings, stuffed crust filling ( what is it????? ) and lack of pepperoni, Unfortunately I bought two. The second one is in the dust bin, they are so bad.

This was until recently called "Pepperoni Passion".. Sadly its a long way from that description unless your idea of passion is a bunch of limp daffodils and a half eaten box of chocolates. In total, 9 pieces of pepperoni, so you get one piece per slice if you do it carefully. Very little cheese, overall very disappointing.

If I could give it 0 stars I would. Its awful. Hardly any pepperoni. The stuffed crust isn't stuffed with anything. Awful and very disappointed!

Hardly any pepperoni on this pizza

Purchased this item because it is (misleadingly) advertised as having extra pepperoni. I had only a handful of pepperoni on the pizza, even less than you see in the photo on the box. Very disappointed. Perhaps the extra pepperoni they are referring to is the pepperoni flavour in the stuffed crust. I don't recall seeing pepperoni pieces in the crust. The pizza itself was bland. Certainly not something I would buy again.

For the price, you can't beat it, it is amazing. The stuffed crust has pepperoni in it with cheese, its just really good. It's not greasy, plenty of pepperoni and is my favourite pizza by far.

It's not that bad

Having pepperoni in the stuffed crust is definitely a weird choice, but I got used to it and even like it now. I would not mind if they went back to a standard stuffed crust at all, but it's fine.