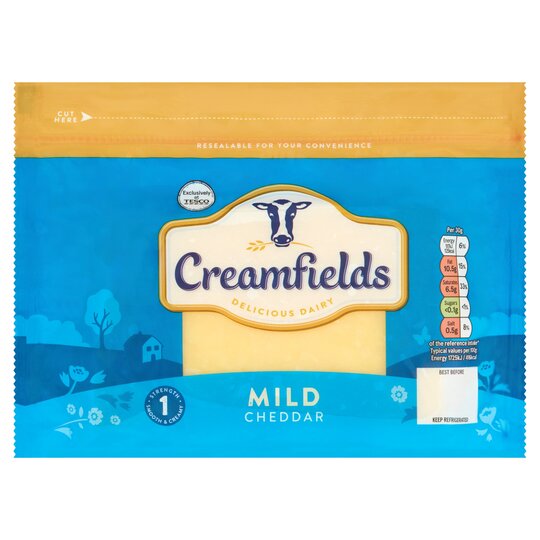 of the reference intake*
Typical values per 100g: Energy 517kJ

Keep refrigerated. Once opened, store in an airtight container.

Made using British and Irish milk.

They removed the re-sealable bag, and funny shape

Absolutely delicious ! I will definitely be tryi

Absolutely delicious ! I will definitely be trying other produce form the creamfields range,

This used to taste really nice as I like a slightly rubbery cheese but the last three packets I ordered were tasteless, had the consistency of a rubber tyre and wouldn't melt when cooked. Won't be buying again.

The texture of this cheese was like string cheese. It was rubbery, tasted of nothing and didn't even melt under the grill. I thought I could use a high value treat for the pooch to finish it rather than binning it, but even he turns his nose up at it... Thats saying something as he eats all cheese and usually runs to the fridge when I grab the packet out. He doesn't even notice this one's open. The mature creamfields cheese is much better.

We loved the creamy mild flavour

Never having been a lover of strong or mature cheddar, I bought a large block of this cheese at the start of lock down and after 5weeks, the small amount I have left, is still as good as day one! The secret is to NEVER touch cheese with your bare hands. The salt in your skin reacts with the cheese and it is this that causes cheese to go mouldy prematurely. I've read the packet and there is no mention what so ever of there being any potato starch in the cheese as mentioned in a previous review. Are they reviewing the same product? This was the first time I had bought this cheddar and it won't be the last time. I loved the mild creamy taste and it was as versatile as any other cheddar I've used. My partner and I used it on pizza, jacket spuds, toast and in omelettes. I even used it in a cheese sauce. The cheese melted without any problem.

I was really shocked to see so many negative reviews about this cheese. I'm not a huge fan of cheese but love this Creamfields mild cheddar, it's super mild almost like Dairylea in a firm block form. I've no idea what the reviewer who stated 'this is not cheese' and 'contains potato starch' is on about, it says on the back of the pack it's mild cheddar cheese and just like most other pure cheese it doesn't have an ingredients list as it's just made from milk curds. Other reviewers have claimed it doesn't melt, I have never experience a problem with it melting, I use it for toasted sandwiches, topping on lasagne, in cheese sauce, as a topping on jacket potatoes and spaghetti bolognese and it's always melts beautifully. If you accept if for what it is, a really super mild firm cheese which doesn't cost that much, you won't be disappointed.

Nice enough cheese if using straight away, HOWEVER 4 days after opening packet it was all green on the outside. We had only used a little bit so it all had to be thrown away.

very mild, my daughter's favourite cheese as it's really quite plain

This product is not cheese. Unfortunately for me,

This product is not cheese. Unfortunately for me, I only learned this after making two large lasagnas for a graduation. The “cheese” totally ruined my dish. It did not melt and stayed in the grated shape on top. The thing is, someone entrusted me to make this dish and I feel I let them down. On the package, it says simply “cheddar “ not cheese. I think this is to cover themselves with regards to false advertising. When I read the back of the package, it said potatoe starch was one of the ingredients. I think this probably mostly this.