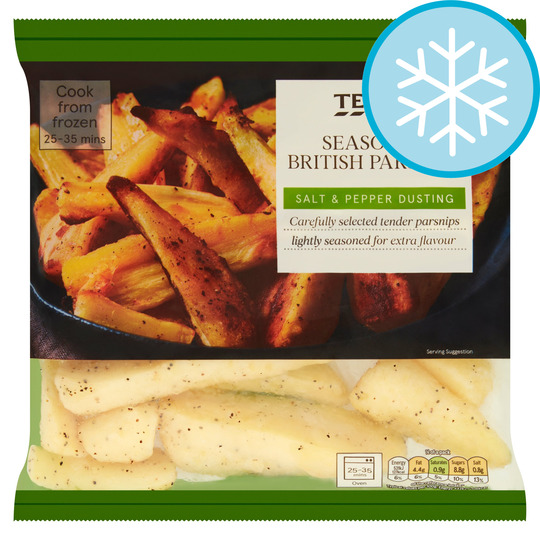 Caution: Do not eat raw..

.In the oven for 45 mins.Still not cooked through.

.In the oven for 45 mins.Still not cooked through.

Truly, truly awful. Cooked for twice the time referred, and were still uncooked. The taste of these parsnips was absolutely revolting, and each of us spat them out. Never have I reviewed such a terribly bad product!

I wish I had read the reviews before buying them. Even after cooking for much longer than the recommended time, and at a higher temp, they remained hard and white. They are mostly all 'core' (the hard bit in the middle) and this does not soften with cooking. Practically inedible. I think they must use those large parsnips that are all woody in the centre and they are not even parboiled first. Absolutely would not recommend.

Really bad. They were cooking for more than the re

Really bad. They were cooking for more than the recommended time, were for our roast dinner and me & my partner couldn't eat them they weren't cooked inside as they were barely warm. Will have to throw the rest of the bag in the bin- such a waste! Will stick to fresh ones!

Dreadful. Cooked as directed but parsnips so woody unable to eat. Had to throw away. Do not buy, waste of money.

I don't understand all the negative reviews. I love these. They taste great. I cook them in with my roast potatoes and they always turn out fine.

Thought I'd be healthy and lazy by buying roasting parsnips that I could put in a tray and roast, but I found these to be very oily, I just buy them naturally and add a small amount of oil.

really dry and woody texture not very nice at all

They were absolute rubbish. Don’t earn even one st

They were absolute rubbish. Don’t earn even one star

Mine had no seasoning on them at all, literally looked just like they had been cut up (very randomly) and then frozen. I had to add loads of oil as they stuck to the roasting tin and, as other reviewers have said, they were all different sizes so it was impossible to cook them evenly. Will never buy these again, would have given them no stars if it was an option!