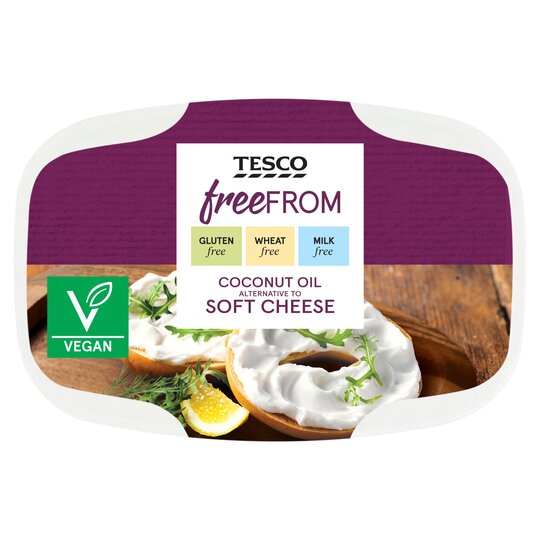 10%of the reference intake
Saturates
6.3g

32%of the reference intake
Sugars
0.3g

4%of the reference intake

Keep refrigerated. Once opened, consume within 7 days and by 'best before' date shown.

I'm obsessed with this stuff! It's a little softer than Violife but it is tangy and delicious. I always have it in my fridge. I'm told it also makes a great cheesecake, but I haven't tried that myself.

This tastes and smells awful. But when combined wi

This tastes and smells awful. But when combined with Oatly cream alternative, some icing sugar and lemon juice made a nice alternative cheesecake. But there is no way you could eat it as an alternative to cream cheese on bread or crackers.

one of the best , can't understand negative feedback , it isn't runny and tastes great on toast , sandwiches or for making sauce. Would recommend

Awful! First time I’d bought dairy free soft cheese, hoping this was similar to Philadelphia for use in a vegan cheesecake. It’s vile, horrible smell and the taste is even worse. Even when mixed with icing sugar and biscoff spread that cheese flavour is so overwhelming! Even if it’s meant more for bread/savoury food it would still be bad. It’s definitely worth spending a little more for a vegan branded product! Don’t not buy!

7 days after opening a bonus

Usually buy well known brand but this one is lovely, no idea how people can be negative about it. It can be used up to 7 days after opening which is a huge bonus and tastes very nice. l add avocado, Mediterranean veg or salad for a healthy lunch, ordering one for my Mum to try, l know she'll love it

Really not great. The flavour is ok but the texture is very off putting. Quite jelly-like in its consistency.

Bought it to make dairy free cheesecake, the smell and taste of the alternative to cream cheese was terrible , wouldn't buy this again.

Great staple for the fridge we even us it as a spread on most things!

I have tried two named brands and two own brands of vegan soft cheese. I find them all fairly tasteless but I am glad they are available However what is most noticeable about this product is the consistency is much runnier than the brand names. It mimics the low fat cheese spreads which have a layer of water on top rather than the US style solid cream cheese. If you want a firmer spread go for the brand name which Tesco also sells.