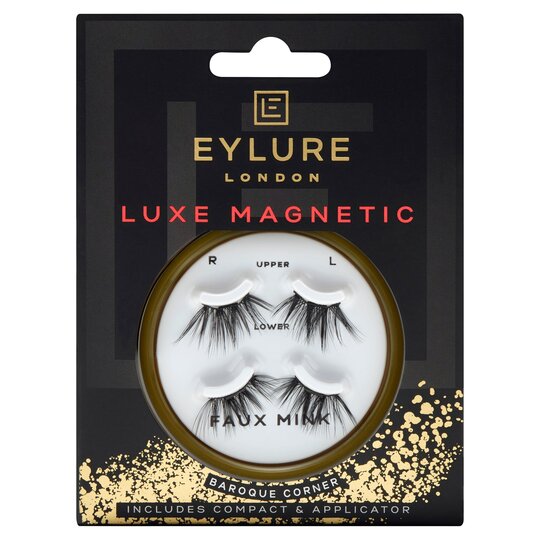 Store these fabulously fluffy styles in your compact so you can wear again and again!

Caution: Only layer one set of Magnetic lashes at a time. Keep out of reach of children. Warning: In case of eye contact, wash out the eye thoroughly with plenty of clean water. If irritation or redness persists seek medical attention.

They’re really hard to put on straight, and when you do get them on, they only have magnets on the ends, so the middle of the lashes bulge out and aren’t flush with your real lashes. You would need glue to make them look right, but then that defeats the purpose of the magnets, so idk. They need more magnets on the lashes for them to work right.

I bought this about a week ago, and I had such a hard time getting them close to the base of my eyelashes. After several attempts, they broke. Maybe I was being too rough with them, but I still feel like they should have held together better... I’m extremely disappointed.

A bit of a learning curve, but they look great! I wore them for several hours.

Fell apart on 3rd use

I was so happy to have a set of reusable magnetic lashes... until I wore them 3 times. They fell apart on removal ! All of the outer lashes fell off and I made sure I had been very careful on removal, never, ever pulling them from the edges. I took them back to boots only to be told they couldn't do anything as I'd paid cash for them and no longer had the receipt! I disposed of the receipt after the first use, as you would do thinking they're fine and you wouldn't need to keep it! I'd be up to the eyeballs in paper if I kept every receipt forever!! So I'm really annoyed and gutted at throwing £14 away, I bought the magnetic ones as the usual ones did the same thing! I thought I'd have better luck with reusable magnetics!!! Obviously not! Annoyed and not impressed.

Great idea if only...

Amazing idea , if only they would look good once applied. Sadly they are super straight instead of curved therefore when u apply them you just look weird unless you have some natural bushy lashes to conceal the super straight line . Maybe full lashes are better instead of 3/4 lashes . I will stick with glue on lashes . Much easier to apply .