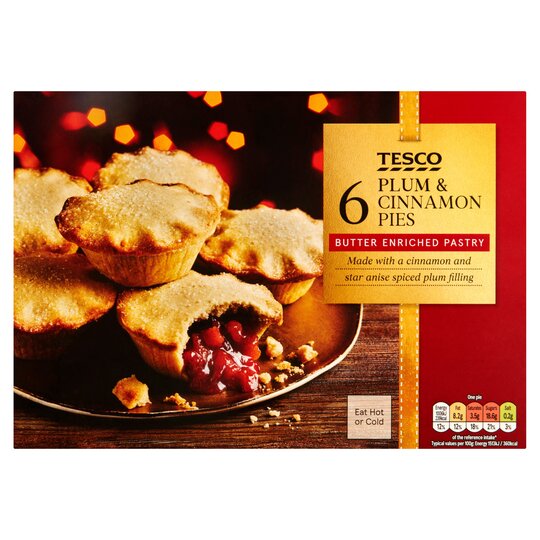 Instructions: Temperature: Fan 160°C, Gas 4, 180°C
Time: 7 mins
Can be eaten hot or cold. Remove outer packaging. Place pies (still in foil cases) on a baking tray in the centre of a pre-heated oven for 7 minutes. Leave to stand for 3 minutes after heating.

Instructions: 800W & 900W 10 secs
Remove all packaging, including foil case.
Place a pie on a microwaveable plate and microwave on full power. If heating 4 or more pies at a time, heat for 30 seconds.
Leave to stand for 2 minutes after heating.

Caution: Although every care has been taken to remove fruit stones, some may remain.

I love plums and cinnamon and these are the perfect combination. I bought them instead of mince pies and so glad I did.

Delicious, wish I had stocked up as they are out of stock now

Amazing, please bring them back in stock!!!!

I was about to buy these pies, which look deliciou

I was about to buy these pies, which look delicious, but then I noticed that the ingredients include palm oil. Surely Tesco is aware of the harm the production of palm oil causes. Is it even necessary in a fruit pie anyway? I won't be buying.

Really didn't like these. They contain aniseed which just doesn't go with the fruit in the pie. Threw the whole packet away after eating one

All good things wrapped in pastry

Crisp short pastry , packed full with delicious plum and cinnamon filling. Delicious hot or cold . I couldn't get enough of them. Will definitely be buying more of these .

These are horrible. Terrible tangy flavour. Bring back the rhubarb and ginger they were delicious.

These are awful. They taste like a Chinese takeaway. Three people have tried them and said the same thing. The pastry is fine but the filling is horrible.

Avoid unless you adore anise.

This is the new Christmas pie answer for those not into mince pies and it is horrid. I don't know why it says cinnamon, when it should really say anise. It reeks of it. It overpowers every other ingredient, so you don't really taste anything else. For the past couple of years at least, Tesco used to do these delicious pear and cinnamon pies that were aimed at those who disliked mince pies, but that ironically only appeared in October time and were never on the shelves come Christmas. If this is a replacement for those, it is a poor one. Slighly better when hot, but i won't bother buying again. Please bring back those pear pies Tesco!