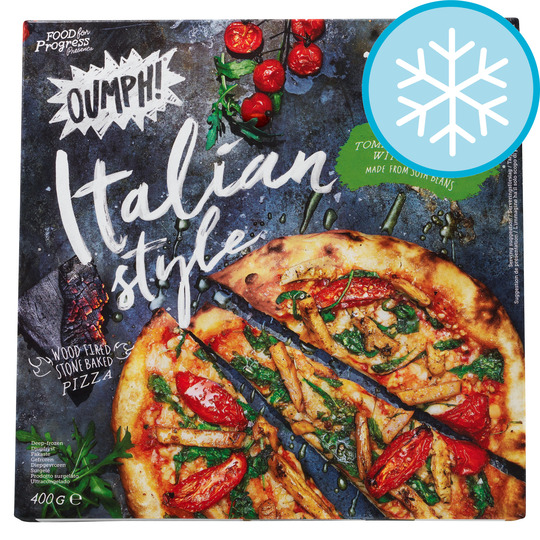 Keep frozen at -18°C or colder. Do not defrost.For best before date see side of pack.

Oven cook
Instructions: Preheat oven: Electric 220 °C. Fan 200 °C. Remove all packaging. Place pizza directly on the middle shelf of the oven and cook for 7-9 minutes. The cooking time may vary depending on your oven. Enjoy!

Everything about this pizza was amazing. I loved it! Would buy it again and again. Needs to be more styles of these!

Oh my oumph! This is the best vegan frozen pizza yet in my opinion (and isn't it amazing to have a choice!) It's delicious and satisfying. The topping was just about right and even the pizza base itself was scrummy. Well done Oumph! If I went to a restaurant and asked for vegan pizza and was served something akin to this, I'd be very impressed. My two furbabies were even drooling at the smell (I of course gave them a mini slice each which the devoured!)

One of the best vegan pizzas I’ve had! Could do wi

One of the best vegan pizzas I’ve had! Could do with some more of the Oumph “meat” but lovely flavours and crispy base.

One of the best store bought pizzas I have had. So tasty and the tomato’s are so juicy - highly, highly recommend!

Absolutely the worst pizza I ever tried, by a huge

Absolutely the worst pizza I ever tried, by a huge distance! I would rather try the cheapest one Tesco sells. The base is rock hard, tasteless and feels it’s fake. Toppings.... disgusting!! Avoid dissatisfaction don’t buy!

No good if you areGF

I cooked the pizza as instructed for 8 minutes and

I cooked the pizza as instructed for 8 minutes and some of the topping was still frozen, I gave it another 5 mins and it was about right. The oomph was a little chewy but the flavour of the rest of the pizza was quite good. Quite herby but the bread base was very nice.

Really great vegan pizza! Great base with plenty of toppings. The tomatoes taste really fresh as well. You can tell it's made in Italy.

Was really looking forward to trying this as I lov

Was really looking forward to trying this as I love thePulled Oumph and have just bought the salty version to try too. This pizza was so disgusting. It had an odd taste to it and no idea what the Oumph! on top was supposed to taste like. The texture of it was bizarre too. Very disappointed.