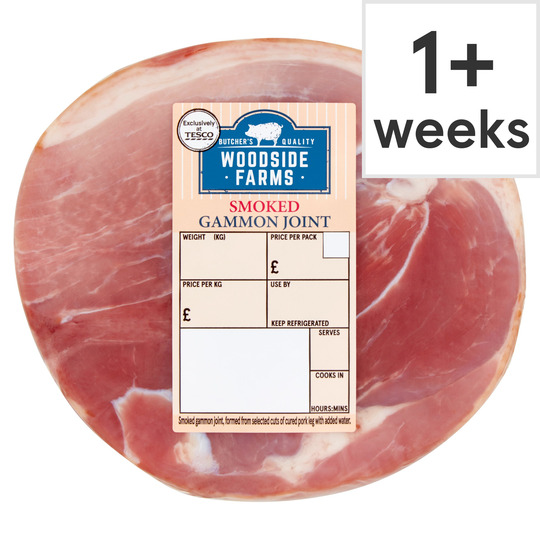 37%of the reference intake
Saturates
10.0g

50%of the reference intake
Sugars
0.5g

114%of the reference intake

Suitable for home freezing. Ideally freeze as soon as possible after purchase but always by 'use by' date shown. Not suitable for cooking from frozen. Defrost thoroughly in the fridge before use. Once defrosted use on the same day and do not refreeze. Follow the preparation guidelines above. Keep refrigerated. Once opened, consume within 2 days and by 'use by' date shown.

This is a staple in our house - great value for money does one family dinner with enough left over for packed lunch sandwiches for 4.

Second one in a 2 weeks that says smoked on the packet but is unsmoked.

Excellent. Succulent, tasty and easy to carve. Wrap in foil and rolling boil for 1 hr.

Just don't do it!

Absolutely awful! Smelt like a hotdog, with the same taste and texture! Not at all what a gammon should taste like, even the labradors were a bit sceptical about the whole thing! Went in the bin!

A hit in our house when boiled in cider! I left it soaking in cold water overnight the first time (in case it was too salty) but forgot to do this the second time. There was no difference. Lovely piece of gammon.

I received this as a substitute for Tesco's own sm

I received this as a substitute for Tesco's own smoked gammon. I was sceptical, but cooked it anyway. I cooked it covered in orange juice to counter the salt and simmered it slowly, rather than roast. It took less time than the instructions. Probably 1.25 mins and the temp read that it was well cooked. I let it cool and covered it in honey and mustard and baked for about 20 minutes. The results were lovely. Very little fat and the saltiness was ok.

I have been buying the unsmoked gammon joints for several months x1 per week, a smoked one was sent as a substitute and was really nice for a change. I have since bought one or the other for the last few weeks as such good value, and previously gave 5* review for my usual unsmoked joint. Really disappointed with the smoked one in this week's order. As with other reviewers I ignore the cooking instructions and simmer long and low then roast off in the oven, again long and low, usually very pleased with the end result, sadly not on this occasion, it had the most awful texture (very rubbery) in fact the bit of fat you do get was like chewing an elastic band, normally never even notice any bit of fat in it, but had to cut chunks out of it as they were inedible (although our 2 Labs enjoyed the treat of them) Although not a complete waste of money, l cannot give more than 2stars based on value of the 1kilo weight, as for the smoked joint itself, l will not buy again, but will continue to buy the unsmoked version

Tougher than a marine's boot and saltier then his language.

Very good value and tasty! I buy one every week for snacks and sandwiches and would highly recommend it.

This was a sub sent by tesco. Really horrible texture. Taste was ok. Threw half of it away. Would not buy again.