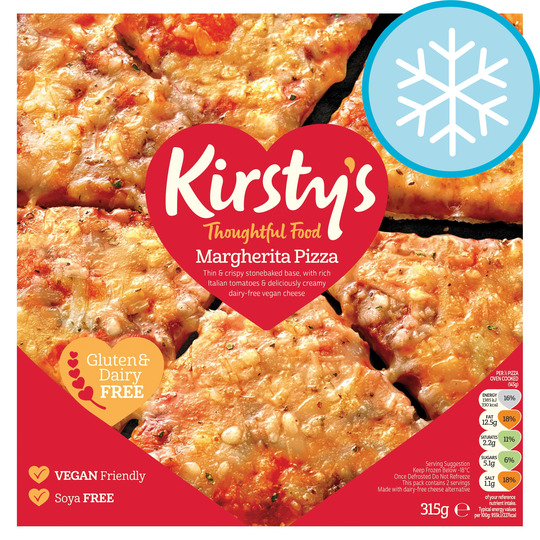 Keep Frozen Below -18°COnce Defrosted Do Not Refreeze

Oven cook
Instructions: Preheat oven. Remove all packaging. Place the pizza onto a baking tray on the middle shelf.
180°C/335°F: 14-16 minutes
Fan 180°C: 12-14 minutes
Check product is piping hot before serving. Do not re-heat.
The following are guidelines only. Always ensure the product is piping hot throughout before serving.
For best results oven bake from frozen.

Made in Italy with Italian tomatoes

i’ve been vegan for over 2 years (i’m 15) so i guess i’ve become used to the taste of vegan cheeses etc. This pizza was quite good, i cooked it for an extra 5 mins and the dough was crispy. Most vegan cheeses do stick to the roof of your mouth and have a slightly weird texture, but I don’t mind it. The only thing i’d say is that the toppings are quite dry as there isn’t much sauce, but it still tastes good. Its better then most vegan pizzas that i’ve tried, it’s probably my second favourite based on store brands, however i haven’t tried that many. it’s also quite low in saturated fat and calories compared to most pizzas so you feel less guilty for eating pizza lol. Have a good day :)

Base is lovely but topping has strange flavour which kids didn’t like. Shame as we need more gluten free options.

finally found a vegan, gluten and soya free pizza!! the dough can be a bit tough due to the lack of gluten and a bit dry, i added some more cheese (grated violife) and some veg to give it a bit more flavour

Simple, tasty, texture of the base could be better

Simple, tasty, texture of the base could be better

Great for a quick dinner in an allergy family

Great for a quick dinner in an allergy family

absolutely delicious was hard not to eat the whole

absolutely delicious was hard not to eat the whole pizza in one go !!!!! The only non dairy cheese that tastes so good !!!!!

Thank you to the two people that gave this lovely vegan pizza a high score saying they were shocked at the low scores given by previous reviewers....I agree with you both and am very grateful that your two reviews encouraged me to buy. A good cheesey pizza used to be my favourite dish, until I went vegan. Of all the vegan pizzas I’ve desperately tried, this is way better than any of them, and I’ve tried quite a few. I loved the original Wicked vegan aubergine pizza, when they didn’t put the coconut cheese on, but I don’t think they still do them and all theirs now appear to have this awful topping. I think I’m just not crazy about vegan cheese based on coconut oil but, on this pizza, it isn’t. Thank goodness...no coconut oil AND no palm oil. The topping on this pizza appears to be bested on sunflower oil, and the difference for me is amazing. All I did was sprinkle over some lovely sea salt crystals. It’s not a cheese pizza, it’s a vegan cheese pizza, but it’s the best I’ve had, bar none. Also, I don’t know why anyone has trouble cooking it and getting a lovely crispy base. I followed the instructions, put it straight on the shelf and it was perfect. I’ll be keeping one in the freezer at all times.

Literally the worst pizza I've ever eaten. I always thought "even a bad pizza is still good", but this is the pizza that proved me wrong. I had one bite and chucked the rest in the bin.

Loads of people are hating this pizza... I love it! I put some chili flakes on it, maybe chili oil (garlic oil would probably be nice), wee bit of rosemary, before I put it in the oven. It's tasty - Obviously it's not going to taste like a non 'free-from' pizza, but I like it.