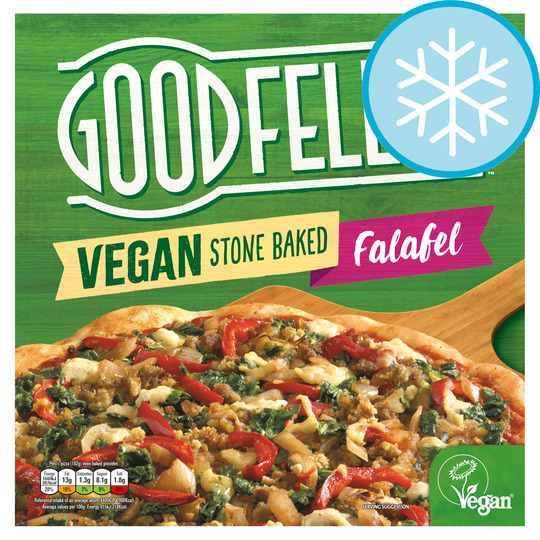 of the reference intake*
Typical values per 100g: Energy 915kJ

Different, but rather nice

I have a fan oven, so as directed i cooked it at 180 for 15 mins. The edge was crisp but the rest wasn’t so will probably cook for at least another 5 mins next time. The base is thin, which i like, and the toppings are generous. You can taste the falafel. All in all i liked it, and the added bonus is it’s not as fattening as regular pizza. It only loses a point because there is no cheese. For me, cheese is important on pizza. Will definitely buy again though.

Always told myself in the past that I'll never go

Always told myself in the past that I'll never go for the vegan option, but since I like chickpeas and falafel I thought I'd go for this. I enjoyed it a lot more than the usual meat feast I'd go for and will probably go for this one more often in the future.

I personally didnt think it was the most attractiv

I personally didnt think it was the most attractive colour wise due to the falafel but it tasted really good. Quite spicy but good at the same time. I would buy again. Great to see vegan pizzas

The pizza is a bit unusual but is delicious. It tastes good, its pretty healthy and its a good option when you want to try something different.

best vegan pizza ever and i’ve tried pretty much every one available, so so good!! not a fan of vegan cheese and this only has a tiny bit which is perfect for me, and it’s not spicy at all despite what the reviews say

You have to try this!

BEST VEGAN PIZZA! So many good flavours going on here- better than a lot of non-veggie pizza I used to eat!

Not pleasant. Overkill on the spicy tomato. Regret

Not pleasant. Overkill on the spicy tomato. Regreted buying it.

Even if you’re not vegan, still worth trying.

I was getting fed up of the same pizza options and I found this one quite by accident as it had not been put on the vegan section. Fantastic flavours. Put me in mind of the spices you get in a burrito. Even if you aren’t vegan, like me, it’s well worth trying though admittedly I did add mayonnaise.

I bought this originally because it was vegan and

I bought this originally because it was vegan and is a pretty healthy option when compared to other pizzas - lower in fat and calories, high in protein. I didn't expect it to taste so good! Really great option whether vegan or not. Relatively healthy, tasty and cruelty-free, love it!

Best vegan pizza, none of that fake cheese rubbish.