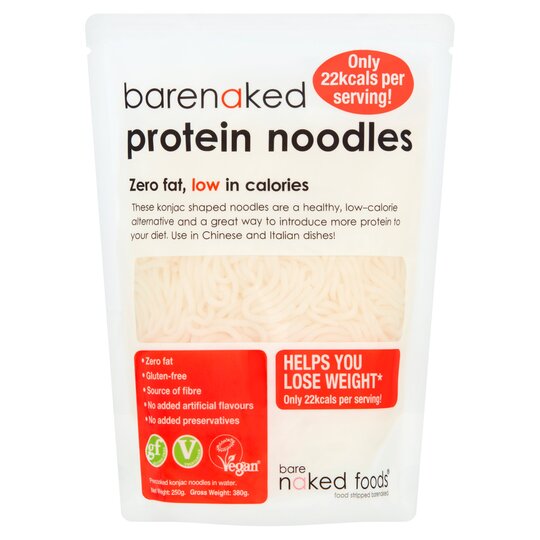 Once opened, keep refrigerated and use within 3 days.

Hob
Instructions: Open corner of packet. Rinse under cold water. Throw into a frying pan and cook for 3 minutes. Add your chosen sauce or vegetables and meat - enjoy!

CAUTION: Choking can occur in people with swallowing difficulties or when ingesting without adequate fluids. Take plenty of water to ensure food reaches the stomach.

Some of the lower reviews of this products are very unfair. At something like 22 calories a portion they are a substitute to noodles that are generally around 100/200 calories a portion; for this alone they deserve a five star! As long as you follow the instructions, they make a delicious addition to a bowl of vegetables stir-fried in garlic and soy sauce. I’ve also had them in middle soup, after I have fried them as per the packet of course. Other reviews seem to be concentration on the smell of the product *before you properly rinse them*. Once they are rinsed properly, (as advised on the packet), they are absolutely fine. They adopt the flavour of my garlic and soy sauce every time I cook them, so in regards to the reviewers who suggest that they do not adopt flavour; the issue may be to do with the chef, not the ingredients.

Disgusting!!! Do not buy. I followed other people’

Disgusting!!! Do not buy. I followed other people’s suggestions by washing them and frying them with soy sauce and garlic but they were revolting. I couldn’t eat all of them because they tasted like worms. I had a stomach ache after and when I went to the loo the next morning I hadn’t even digested them and were whole!!!!!

Absolutely love these gluten free also Rinse them, then put into a pan and stir fry with a bit of gf soya sauce and garlic, prawns or what ever you want taste delicious 😋

Followed the preparation & cooking instructions to the T. Tasted like plastic, actually they tasted like worms. That’s not an exaggeration. Looked really good in the pan but ugh they tasted of nothing! Should have known really due to them having only 26 calories lol don’t know what I was thinking. Don’t waste your money and buy real noodles.

I bought these because I'm looking to get more protein in my diet. Absolutely disgusting. Firstly, the packet instructs you to wash them before cooking... they smell so strongly like fish, its disgusting. But I thought, oh well if I rinse them well enough it should be fine... I cook them and prepare a nice meal for myself only to throw more than half of it away because it was just inedible. After the first few bites I thought they were a bit weird but still OK... But the more I ate the more I realised how wrong I was. The only way to describe the texture is how you'd imagine biting into a worm. Its slightly crunchy but still really slimy. Disgusting. And they have 0 taste. I would say they taste like water but even that is being generous! So now I'm lying here in bed writing this review because I can't stop thinking of how disgusting they are. I feel physically sick. Awful. Don't buy. There has GOT to be better options than this!!!

Easy and quick, not the best rice you will ever have but throw in the low calorie count and it is an absolute winner.

Don't try not even for a bet.

Absolutely disgusting. Think of shoe laces if they were made of plastic bags and rubber torn of your shoe soles, that is probably considered to be a delicacy compared to this. The best alternative protein noodles is by far the Food company protein noodles, that actually is food. This is some other level of awfulness, and I've done ATM with my husband (is part of a review I'm borrowing from someone to describe the taste)

Though expensive, I like them very much, but you DO need to drain and rinse thoroughly (at arms length) and use a tasty sauce with them. They definitely do not freeze, I tried the rice in the same way I have with ordinary rice, but it loses texture and is just unpleasant. For this reason I wish there were single portions as I don't always want it on two successive days. Wish more shapes were made too.

I bought these because I'm trying to increase my protein content, but I should have read the packet. They contain ony 20% of the protein of regular egg noodles. They are low carb, so would be better described as low carb/calorie noodles, than protein noodles. They are also double wrapped in plastic, which is totally unnecessary.