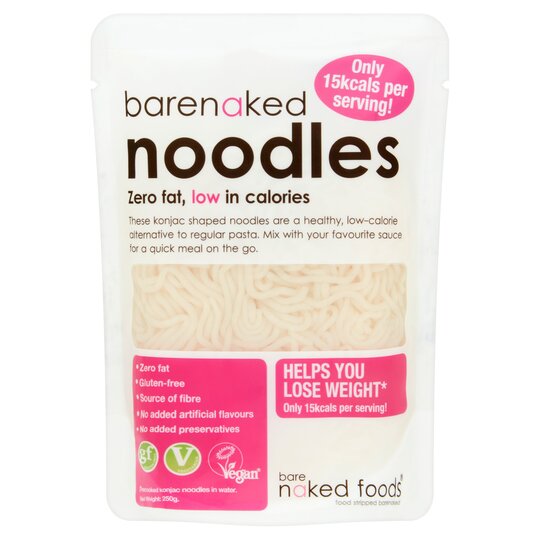 Once opened, keep refrigerated and use within 3 days.

Hob
Instructions: Open corner of packet. Drain water. Throw into a frying pan and cook for 3 minutes. Add your chosen sauce or vegetables and meat - enjoy!

CAUTION: Choking can occur in people with swallowing difficulties or when ingesting without adequate fluids. Take plenty of water to ensure food reaches the stomach.

Easy and quick, not the best noodles you will ever have but throw in the low calorie count and it is an absolute winner.

I dont particularly like the texture of these. Wish you would bring back the much tastier oomi noodles which were a lot more like normal noodles.

Very nice, I simmered on a low heat for 10 minutes and that seemed to soften them up

Firstly, thank you to the other reviewers for their helpful advice :-) I did as suggested and rinsed the product thoroughly with boiling water and also with a splash of apple cider vinegar. I then gently fried them before adding a cooked lamb tagine to the pan - just to impart some flavour. I wouldn’t say that these are awesome but they bulked up my meal and they certainly weren’t terrible. They were somewhat firmer than noodles, a bit like mushrooms or squid, but not incredibly chewy. They are pricey though, so I will look for something cheaper, but otherwise I would buy them again. I think as long as you’re having them with something that is quite flavoursome or spicy, they are fine. No adverse effects suffered - Yay! Plus my 4 year old tried them and thought they were alright. Just look on them as a substitute for noodles.

Terrible noodles, tasteless and of a plasticky texture

There's a fishy smell when you open the bag but no

There's a fishy smell when you open the bag but noodles don't taste fishy. I would recommend to rinse it in the water a few times and then boil it before use. I love the texture as it reminded me of Kanomjeen ( fresh, thin rice noodles in Thai cuisine which are made from rice ) it's lovely when eating with red or green curry.

overpriced and needs effort to be made good

the texture needs some adapting to. this product is overpriced [hint: look for konjac noodles in the international section, they're the same thing but cheaper] and there's little information on how to cook them to make them actually decent. I find that rinsing them with water in a sieve until the smell has gone, leaving them in boiling water with white wine vinegar in until the water has gone, and THEN frying them like the packet says makes the noodles the most tolerable. the white wine vinegar counteracts the weird taste, and the boiling water acts almost like a par-baking would for the base of an apple pie. it's a lot of effort to make them decent.

There is a fishy smell but it goes away after cooking the noodles and it has zero taste of fish. Low rating from me since the texture is horrible in my opinion, very far from ''standard'' noodles. I don't tend to be bothered much but texture of food but this one is so much different. Texture is more chewy, Id compare it to a mushroom? Noodles have also no taste. Bought it to try and I'm quite disappointed, specially when its so expensive compared to other noodles. I wish I could like them since theyre low on calories.

Great way to bulk up a meal, guilt-free!

These noodles are a great way to bulk up a meal without adding the calories! It's true that they have a bit of a fishy smell when you open them, but just rinse them through a sieve with a kettle of boiling water and you're sorted. I used my packed to add to two meals – a miso soup and a tofu salad. In both cases, they made the meals filling whilst still being very light. They do have a slightly different texture to usual noodles, but they're not at all unpleasant. The only negative for me is that they're a fair bit more expensive than standard noodles, but I guess that's something you just have to accept because of the health payoff. Will definitely buy again.