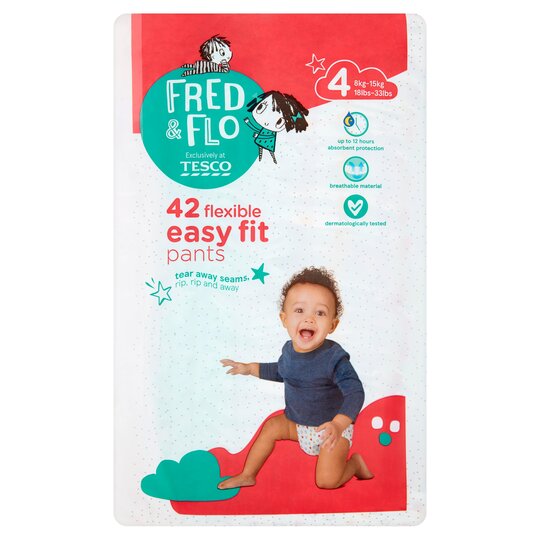 Warning Plastic bags can be dangerous. To avoid danger of suffocation keep this bag away from babies, children & animals.

Always happy with this product

Used for quite some time now and they have never leaked.Easy to put on too

Really surprised at the negative reviews on these

Really surprised at the negative reviews on these nappy pants, I've bought two packs over the last month or so as I now have a very wriggly baby, and I've had no issues so far. No leaking even when left on overnight. I really like the fact that it doesn't leave a mark around the tummy and legs like some other brands. Agree that a sticky tab might be useful but I think that's a very small issue for the price. I'd recommend.

If I could give this a 0 I would they rip while putting them on and leak instantly. Absolute rubbish definitely won’t buy again

Not bad but not great

For the price these aren't too bad. However, when you are changing your little one there is no tab on them to seal the nappy before putting it in the nappy bag, like the other brands do. I found that because of this I'm less likely to but them again. The quality of the nappy itself is actually pretty high when compared to pampers ect and they are absorbent.

These are as good as useless, within an hr and nowhere near full this starts to leak. Regularly end up popping to the shops and needing to change my sons whole outfit while I'm out. So disappointed as I love the pampers but not the pampers price but these are absolutely no competition

Started using these nappies pants at size 4 now using size 5, and they are the best nappy around. Loose fitting so leaves no marks on my little ones skin, no leaks ever even after a 12 hour night wear. Best brand of nappy there is after trying everthing from pampers to mamia.

Always used Tesco nappies especially since my son been in the pull ups and got on very well, the fit was nice and they lasted ages. Since Tesco changed the nappies to the free and Flo ones, the fit is still nice but I'm going through nappies like nobody's business! the amount of leaks if I don't get chance to chance the nappy after 2-3 hours is insane, nd where as I was only using about 4 nappies a day that had dramatically increased to try avoid all the leaks. I thought the nappies would be the same just with a new picture on it they're not and unfortunately I'm going to have to look at using another brand of pull up nappy now as we getting on so bad. bring back the Tesco loves baby nappies!!!

Worst nappy pants ever. I lost count on the amount of times those nappy pants leaked, even after wearing for only 2 hours. There's clearly something wrong with the design. Initially I bought size 5 but they were too big for my LO, so bought a size 4 (she wears size 4 in Pampers and never had any issues). Tired of having to change her outfits throughout day and night and the constant washing

Only put 1 star because I had to put something. These are terrible. Used to buy tesco nappies all the time and really rated them and suggested them to others, but now they leak and im having to change his whole outfit most times as he us soaked. I’m very annoyed by the change they’ve done to them as I’m going to have to pay out triple the price for pampers.

I definitely wouldn’t recommend these nappies although initially they looked good quality and a lot less bulky than some other brands, however the first time we used these on our toddler the nappy leaked after a short amount of time and with her vest and trousers become wet and needing to be changed after changing into a new nappy I made sure to keep checking this time that the nappy wasn’t too full however when I rechecked I realised the nappy had fallen down quite far, again after having only been on a limited amount of time! These nappies don’t appear to have enough elastic to hold them in place nor do the seem to be able to hold any wetness at all!!!! Very disappointing!