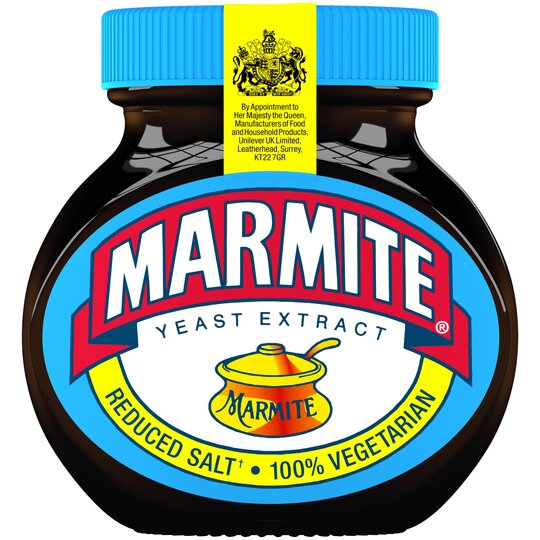 This spread is totally not spreadable.with the consistency of Victorian Carpenters Glue and a flavour as though 150 years old. I quite like Marmite but this is just yuk and bears no resemblance to it's elder brother.

It tastes the same

Tried this just to see the effect on taste. It still tastes the same - marmite!! We’re sticking to the reduced salt version from now on

Leave it out Guv'nor!!

Tried it as a healthy substitute for the regular marmite. Being a life long fan of marmite this product insulted my taste-buds and offended my senses. My desire for the rich salty taste was such that I was spreading twice as much and still not getting the hit. Don't buy it if you like regular marmite it's like Lidle's attempt at making it!! Mr Angry from Purley ;o)

Tastes just the same as "normal" Marmite, great. I use it on toast and sometimes with black bean spaghetti.

Love Marmite? Don't buy this, it's not the same

I love marmite and thought this might be a good healthier version. It isn't! It has an unpleasant after taste, it was so bad that I threw it out after one taste. I'm sticking to my normal (saltier) marmite from now on. Sorry Marmite, this is a fail!!

Tastes no different to the original Marmite

I recently bought this to compare it to the original Marmite. I honestly can't taste the difference, so will buy this in future. WIBA = Yes (WIBA = Would I buy Again)

The Lower Salt Marmite has an improved flavour but

The Lower Salt Marmite has an improved flavour but less satisfactory spreading properties. I always liked Marmite, but have increasingly found it too salty. Vegemite is less salty, and I've used it, but the taste is distinctly different, and I've not been able to get used to it. I've therefore turned to various supermarket own label brands of "Yeast Extract" or "Savoury Spread". These have often been satisfactory but I've found them inconsistent. I think I prefer this newer low salt Marmite (although I've only had one jar so far) but I've noticed its viscosity and/or flowing properties are different, and that it spreads less satisfactorily than the original Marmite.