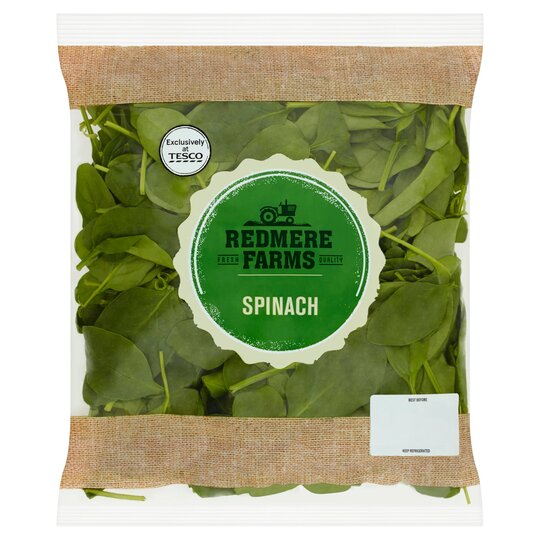 Tiny leaves which take ages to wilt down and taste gritty even when wilted, have had two or three packs now, because the Tesco own brand was sold out, but Tesco baby Spinach is so much nicer.

OK like sandwiches a la beach plenty of grit

Bought two bags as tesco own 500g not available. Washed first bag in colander 3 times and it was still full of grit wen we tried after cooking. Second bag rinsed in whole washing up bowl of water and scooped out by hand, first lot of water had load of what appeared to be sand in, drained after third bowlful and this was ok when cooked. No good using a cheap supplier if customer ends up paying for grit not spinach. Will never buy again - although maybe that is the idea as had to buy much more expensive version.

It was fine until last week, it was full of sand, so much so that I couldn't get it out of my bowl after trying to wash it. Unusable.

I have bought this product before and thought it was fine, not great but good enough for cooking with. However, in my most recent bag there was an actual leaf from a tree in the packet - a big brown autumn leaf (about 3-4" in size and similar in shape to a birch leaf). The actual spinach leaves were tiny (not in a good way) with tough stems. All round very poor quality. It's put me off buying the product again.

This has always been perfect for me, once I open i

This has always been perfect for me, once I open it i store in tight ikea bag and wash as I need it. I find redmere good quality.

The last few weeks the redmere spinach has been go

The last few weeks the redmere spinach has been going of quick long before the date its all slimy and disgusting and i have had to complain about it .If your going to sell the spinach make sure it is fresh and lasts its lifetime there is nothing worse than food that has gone off by it's use by date .

Too wet, turns to rotten mush within a day.

The spinach is too wet when bagged (after being washed I suppose) and turns to mush within a day. Sort this out and it could be a winner

Lots of insect bites out of the leaves