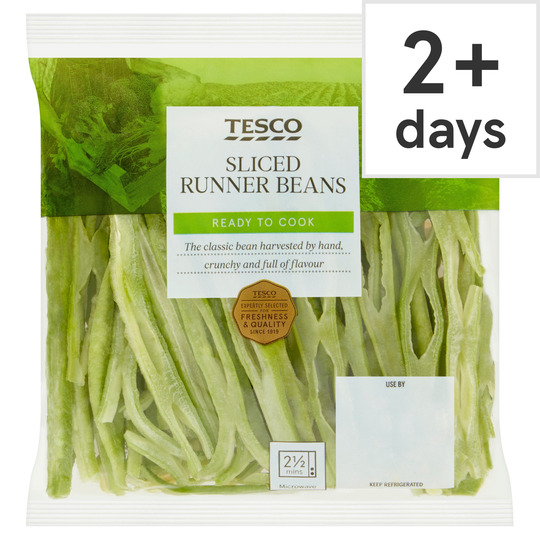 Instructions: Do not remove from packaging. Pierce bag several times and place on a non-metallic plate. Heat on full power for 2 minutes 30 seconds (800W)/2 minutes (900W). Stand for 1 1/2 minutes.

Cooking Instructions
Instructions: Washed and ready to cook. Do not eat raw.
Caution
Take care when handling or opening the pack as hot steam may escape.
All appliances vary, these are guidelines only.
Check food is piping hot throughout before serving.

Hob
Instructions: Remove all packaging. Empty contents into a saucepan of boiling water. Boil for 5-6 minutes. Drain well before serving.

Steam
Instructions: Remove all packaging. Place in a steamer for 5-7 minutes or until tender.

Do not eat raw.

We order groceries for a week ahead. These arrived and looked dried out on the day of delivery. i cooked them the day after, well within date and they were tough and stringy.I had to throw some, which were brown, away. This is NOT GOOD ENOUGH Tesco!

For the last two weeks the quality of these beans have been disgusting. They are brown and obviously had it. As I am doing click and collect I cannot choose them myself so that is also a draw back as if I were to pick them I would make sure I chose the greener looking ones. I had three packs delivered last Friday they all went into the waste bin. I would have returned them but I am not entering any shops.The week before that one of the bags went into the bin. I wrote an email to Tesco asking for a refund but as yet have not had a reply. I know it is difficult times and the staff are working extra hard.

Decent and worth it

Nice texture and good quantity. I don't understand the criticism of others about the colour or texture. Perhaps they weren't cooking it properly. Pretty simple: enough water to submerge but not too much if you want to steam it a little. Hoped for a stronger flavour but it's still nice enough.

Quality was awful - had to throw 50% away

These aren't the nicest beans I've tried. They seem to take a while to soften and they turn brown when cooked

Best sliced runner beans I have ever had

Best runner beans I have ever had. And having them sliced is a plus for me as I have a problem with my right wrist. I have tried putting them in the microwave but I think they are better on the hob. I have them EVERY night ! Thank you Tesco

They came out of the packet sweaty even though the

They came out of the packet sweaty even though they were the right date on the package.Cooked them and they were anemic looking,not green at all,and were hard and inedible.

When preparing runner beans, any cook or chef worthy of the name will first remove the “strings” down either side of the bean, because they are tough, fibrous and... well... stringy. This is not done with this product, so half the weight of each pack needs to be discarded, or the strings will spoil the texture of the entire pack. This makes them very poor value for money (and it’s ridiculously time-consuming to pick out the strings).