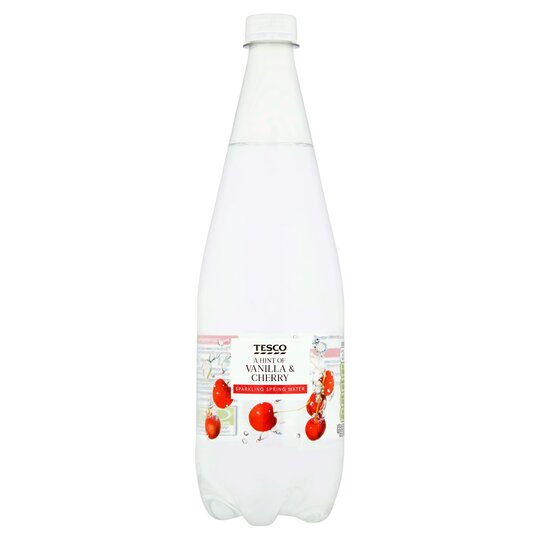 Store in a cool, dry place and out of direct sunlight. Once opened, keep refrigerated and consume within 3 days.

Absolutely disgusting... Nothing else to say.

Absolutely disgusting... Nothing else to say.

Tastes too bitter , not very nice.

This smelt of vanilla and cheery but had no flavour what so ever, tasted like sparkling water!

Tasted like tonic water rather than fresh water. N

Tasted like tonic water rather than fresh water. Not nice at all. Had to add saccharin to make it palatable.

It tastes like the smell of the jar of cocktail ch

It tastes like the smell of the jar of cocktail cherries your parents brought out every Christmas in the 70's. Not my thing but takes all sorts.

I love this cherry and vanilla water.... personall

I love this cherry and vanilla water.... personally I think this is the nicest water based drink I have ever tasted. Well done Tesco!

Bought three bottles of "A hint of" sparkling spring water; Apple and Elderflower, Vanilla and Cherry, Kiwi and Pear. NONE of them had any hint of the flavour listed on the label. They were all AWFUL.

Helping me cut out sugary drinks, can't drink plain water. Need fizzy and this has no sugar but lots of flavour,

This is truly awful almost undrinkable, the vanilla flavouring is overpoweringly chemically tasting and the cherry sickeningly sweet. I could only drink it to dilute an orange squash to help mask the flavour. I wouldn't call this a hint of vanilla more like a resounding smash over the head