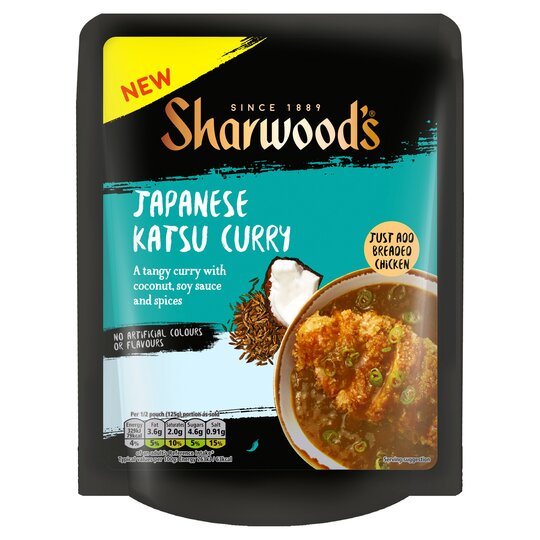 of the reference intake*
Typical values per 100g: Energy as sold Per 100g

Store in a cool dry place.Once opened refrigerate & use within 3 days.

Product of the UK

Awful. Vinegar is the main taste component. Its watery and nothing like the flavour of traditional chicken katsu curry. Avoid.

Absolutely vile I'm afraid. This tastes nothing like a katsu curry sauce. It's overly tangy and quite runny too. Alarm bells rang when the pouch was opened and a sharp, vinegary smell emerged from within! Avoid like the plague unless you're partial to a wondrous vinegar curry! Bought two on an offer, other pouch binned.

Bought two packets on special offer but gave the 2

Bought two packets on special offer but gave the 2nd away, this is a bad katsu sauce.

Absolutely vile - do not buy this

Not the katsu sauce you’re looking for

It wasn’t a bad flavour. Its like a classic mild-ish curry. But it certainly isn’t the Japanese style curry sauce you’d expect if ordering a katsu curry in Japan or any of the chains over here where you’d likely order a katsu from. So if you’re specifically looking to recreate that flavour give this a miss! If you’re just after a mild-ish curry sauce then buy away!

Awful. Glad I tried before I poured over my dinner 😧

Unfortunately, this is not Japanese curry at all.

Unfortunately, this is not Japanese curry at all. It's from other Asian country somewhere else.

Didn't realise it wasn't vegetarian... so never got to try it. I don't know why it isn't veggie as katsu veg are to die for.

It's a nice easy Katsu Curry. Quite spicy and fruity. I would have given 5 stars if it was a bit creamier and thicker.. However I would buy again.