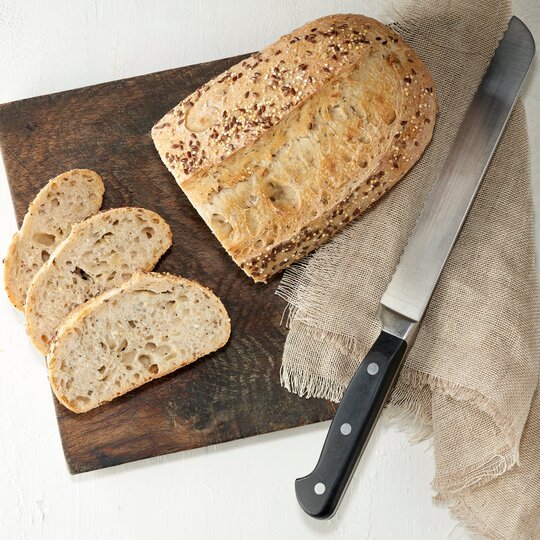 I bought this in store a couple of weeks ago. It was my first in-store shop since March 2020. I wanted a white sourdough but it wad 7pm and this was the last loaf left on the shelf. Normally i dont like seeded loaves but i took it thinking better than nothing. It felt hard to touch in the packet and i thought since it was late and the last one it would probably be stale too. How wrong i was. I got home and sliced into it and whilst the outside crust was crusty and crumbled to cut as it should, the inside was perfectly soft and fluffy. But i have to say this loaf was best toasted. Somehow once toasted it doubled in deliciousness and was honestly the nicest bread i have ever had. The loaf is quite small so sliced sideways the slices were quite small, but even so it should do several people and I polished the whole thing off in one night toasted. It was absolutely delicious. The only down side was seeds falling out everywhere on the counter and in the toaster but that is true of any seeded bread. They gave it extra flavour. It is also proper sourdough loaf being only flour salt and water without yeast. The whole point of sourdough is that it is risen using a sourdough starter instead of yeast so so-called sourdough that contains yeast is not actually sourdough at all!! Its just bread! 100% recommend.

Always order this one!!

Best sourdough bread I have tasted. I use it mostly for toast it is so tasty.

Has it got smaller?

I would give this 5 stars. I love the taste and texture but ..... we have been buying the bread for over a year and it most definitely has been getting smaller. Weighed today and it was 365g, not 400g. I also seems more dense than it used to be? Please look into this as it is/was a perfect loaf.

Reduced size for same price and not as fresh.

Starting buying this bread around March 2020 time. And lasted well almost a week. Now it costs the same, it's 1/3 smaller and is stale from day 1.

Nice bread for a change.

Disappointing - not much flavour and not very moist or fresh tasting. I was expecting to taste the grains, but hardly noticed any difference from plain white bread.

The name is misleading everyone. It is a white sour bread with sunflower seeds, a bit on harder than normal bread topped with linseeds, quinoa. If you are like me who avoids white bread then this bread is not for you.

I think the 'ancient grain' title is misleading. It seems to be mainly standard wheat flour. It must refer to Quinoa, of which there is only a tiny fraction in this bread. Not proper sourdough bread but tolerable and free from lots of additives and chemicals. Worth noting that you can pop it under the tap when stale and cook again for 20 mins in the oven for lovely fresh bread again, so much less wasteful.

I only bought this bread this week and absolutely love it. Have always bought the ordinary sourdough bread but this is so much better. much better taste to it and not so dry as the original sourdough bread. Thank you as it is the only bread that I can eat so it is nice to taste something that you enjoy