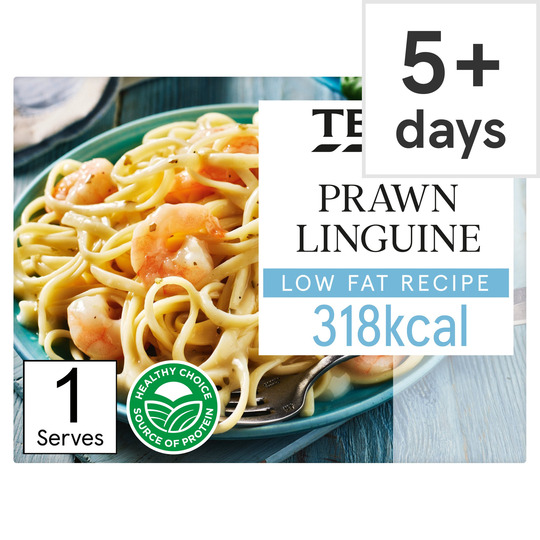 Quite tasty, however I had 4 prawns!

Quite tasty, however I had 4 prawns!

If I could give no stars I would. I’ve never placed a food review in the 20+ yrs I’ve shopped with Tesco but this is awful. The sauce has no flavour and looks like dirty dish water and there were three prawns in it! Seriously bad. Tesco remove this from your shelves.

Horrible watery what prawns there were, were rubbe

Horrible watery what prawns there were, were rubbery like bullets, avoid

This prawn linguine was awful. Pasta floating in a white watery ??? (Definitely not a sauce) with...wait for it...four prawns!! Which were completely tasteless! Disappointed is an understatement.

3 prawns and a pile of linguine in an okish sauce (creamy sauces not my thing but bought by my partner) Main gripe is the 3 prawns - we don't often have ready meals and I'm not convinced this is the usual but it seems to me it shouldn't be called prawn linguine with that few, even if it is cheap.

Should be called linguini with FOUR PRAWNS!

Five rubbery prawns in a bowl of soggy noodles swimming in flavourless sauce. I had to add salt, red pesto and parmesan to make it edible, which defeated the idea of a "diet" dish unfortunately.

Not surprisingly it's just slightly over 300 kcal with 3 prawns in my linguini! But in general nice meal, sauce is ok, for sure not same as homemade but good enough! 3 stars, one per prawn!

Disappointing and a very poor recipe

Disappointing. 5 prawns and nothing else but linguine in lots of a rather tasteless very thin and watery sauce. The watery sauce is presumably what makes it "diet". I'd rather have less of a more tasty and calorific sauce or one made from vegetables. Very poor menu design. Sadly I bought 2 of them :(

Avoid this. Prawns and pasta are overcooked and the sauce is tasteless. Complete waste of money as binned it.