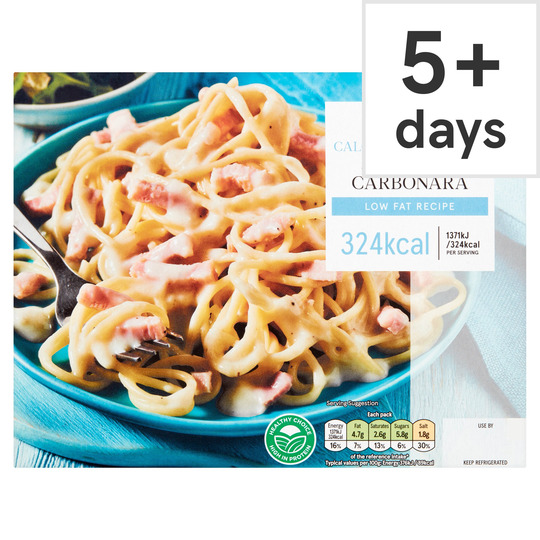 Made using British and EU pork.

Without a doubt the worst ready meal I have ever had. Watery, tasteless and the meat looks about 10 years old. If you’re calorie counting & want to pick something up quickly after work, don’t choose this.

watery and tasteless. Dont waste your money had to

watery and tasteless. Dont waste your money had to throw it away!

My colleague said it looked like minge juice. i thought it was ok

Absolutely terrible ! Watery sauce so thin and left me so hungry ! Obviously not expecting this low calorie meal to fill me to the brim but I was more hungry after I ate it to be honest , wouldn’t buy again !

Not good... but definitely fixable!

I read the reviews on here after buying it unfortunately. The sauce is very, very thin and has no taste. The bacon looks more like it’s been steamed than cooked, and was chewy and flavourless. I managed to fix it though, on my second attempt. I put it in a saucepan, added 30g of Tesco’s 50% less fat mature cheddar (brings it up to 446 calories but makes a world of difference!). Added garlic powder, salt and pepper, cooked it down for about 10 minutes and it was amazing. I’ll buy it again - so much easier than making one from scratch.

One of my favourites

This would have been a nice dish but it was over loaded with garlic and the sauce was so runny you almost need a spoon.

This was so bland, and no flavour at all

Absolutely awful. Bland, no taste. Truly awful. I pity the pig they put pieces of in the sauce. Might as well of used soya. So to recap it wasn’t nice